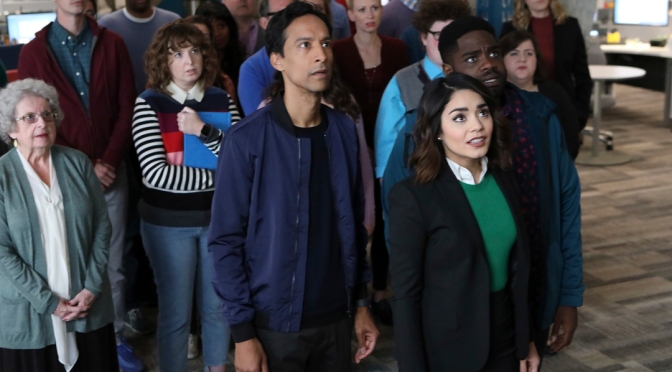 I didn’t have high hopes for Powerless, to be honest. I don’t watch many half-hour sitcoms anymore at all, and this one had a couple of big changes in development that made the finished product something other than what I initially got moderately excited about when I first heard about it. Predictably, much of the pilot episode–bad-puntastically titled “Wayne or Lose”–was already spoiled by the trailers leading up to it, but I was pleasantly surprised to find the show overall well-constructed, slickly produced and consistently funny, with a well-chosen cast that has good chemistry right out of the gate. It’s what I imagine might happen if circa 2008 Zooey Deschanel had a baby with an obscure DC comics title, but in a good way.

Vanessa Hudgens plays likable ingenue Emily Locke, who arrives in Charm City bright-eyed and bushy-tailed and ready for her first day as the head of R&D at Wayne Security. Hudgens does a great job of selling Emily’s wide-eyed excitement about the city and her new position, but her sunny optimism is tempered by real ambition and a deep-down belief in herself and her ability to make a positive impact on the world. Emily’s determination to be better (a motto she writes in permanent marker on a whiteboard) is something I genuinely appreciate as a personal and professional goal in my own life, and the show it’s a motto that feels real and achievable. Sure, Emily may have gotten it from the enormous Bruce Wayne-authored business bible she carries around with her for half the episode, but I rather think it’s one of the few motivational tools she has that really is all hers. I certainly hope so, since it’s written in permanent marker.

Emily’s sunny disposition is obviously not shared by the rest of the Wayne Security team. Boss Van Wayne (Alan Tudyk in excellent form) just wants to be transferred to the Gotham City offices and jumps at the opportunity to “fail up.” We learn that Van’s assistant, Jackie (Christina Kirk), started off very like Emily but has been worn down by the work environment. Danny Pudi, Ron Funches, and Atlin Mitchell round out the R&D department as Teddy, Ron and Wendy, respectively, and they too have spent enough time having their ideas dismissed and dreams crushed that they aren’t exactly welcoming to Emily, who (it turns out) is their fifth new boss in the last year. This obviously isn’t an altogether original setup for a workplace/fish-out-of-water comedy, but it’s a formula that works and the DC universe setting is enough of a twist to keep me interested.

Speaking of the setting, it’s really smartly done, and there are a ton of great comic book and genre references for longtime comics fans to catch and for less fannish folks to google after the episode. The use of obscure-ish heroes and villains like Starro, Jack O’Lantern, and Crimson Fox works well to firmly place Charm City (invented for the show) in the DC universe of the comics, but also firmly separate from everything else currently in production for film or television in the DC universe. Other details–like Adam West’s voiceover in a Wayne Security commercial for Joker anti-venom or Emily’s father being played by the 1978 Superman‘s Jimmy Olsen, Marc McClure–will be even less obvious for casual viewers but more delightful for serious fans of the genre and obsessive googlers like myself.

In the, end, though, there’s not much (yet, at least) about Powerless that is particularly unique or groundbreaking. It’s got a diverse cast, but that’s pretty bare minimum these days. It’s got a quietly progressive message, but it remains to be seen if that is nurtured into something more than a milquetoast slogan on a whiteboard. There’s a good deal of feminist potential here, but female friendships and mentoring relationships must also be nurtured and grown to really count for much.

Still, this is a promising first episode, smart and funny without being cynical, sunny and sweet without being cloying. Two weeks into what might be the apocalypse (and is a depressing time to live through regardless), Powerless has turned out to be exactly the sort of lighthearted thing I want to watch, especially now that the first season of The Good Place is over.

And speaking of The Good Place, do yourself a favor and go watch it immediately if you haven’t already.