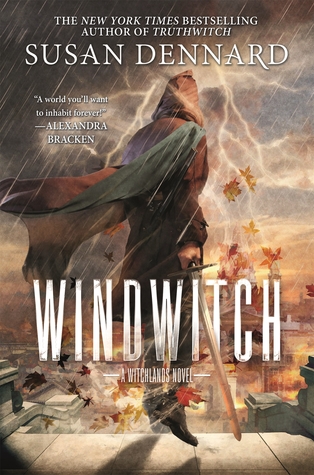 I read Truthwitch around this time last year and enjoyed it in spite of its flaws, which were, well, many. But it was the start of a new series, and it featured a great friendship between two young women and had an interesting idea for a system of magic. Plus, while my tastes certainly skew towards the literary end of SFF, I appreciate some light reading to break up my routine from time to time. So I was pretty excited about Windwitch after enjoying its predecessor so much. Unfortunately, it turned out to be my biggest reading disappointment in a long while. Windwitch is the absolute worst sort of boring, insipid, YA claptrap I’ve read in years.

In Truthwitch, the story revolved primarily around Safi and Iseult, but Windwitch finds the two girls separated entirely. Obviously, based on the title, readers of the first book could expect Merik to feature largely in this one, and he does, but he is also disconnected from Safi and Iseult so that none of the primary characters from the last book actually interact with each other in any significant way. Instead, they’re shuffled around and paired off with others–Safi with Vaness and then both of them with a group of Hell-Bards, Iseult with Aeduan, and Merik with Cam and then sort of with his sister Vivia (who has been upgraded to a POV role)–but none of these interactions are very compelling, and very little actually happens at all, in spite of the book feeling fast-paced for most of its page count.

Safi and Vaness go on a journey, get captured a couple of times, and have to escape, only to learn that they don’t actually know what they’re doing. Iseult and Aeduan are also going on a journey, but they never get anywhere and then end up learning that they have to do something different from what they thought they were doing for the whole rest of the book. And Merik is trying to do something in Nubrevna but then finds out that he didn’t actually know anything about anything. Which, I guess, is supposed to be the main theme of the book–this whole no one knowing anything–but by the end of the book I found I simply didn’t care. It’s not even that the characters make foolish decisions or that everything feels so contrived and senselessly convoluted. Frankly, it’s all just so boring that I ended up just skimming whole chapters to get through it faster, and don’t think I missed out on anything.

None of this is helped by the fact that major aspects of the Witchlands’ magic system are still not very well-explained. It was only about halfway through this book that I finally decided that I’m just going to understand people who are “Cleaved” to be something like zombies, for example, even though I don’t think it’s at all conclusive from the text that this is the case. The magic of all the various characters continues to feel poorly defined, and the way Dennard uses it in the story is inconsistent. I’m sure that she has rules for how she’s writing the Witchlands magic, but whatever they are they’re basically incomprehensible to the reader. This was true enough in Truthwitch, and I called it forgivable because it was a first book in a new series and I otherwise enjoyed it. I thought that surely some of the fuzzier details of things would come into focus in this second book. They did not.

To add to these problems, none of the relationships or character arcs in Windwitch are at all interesting or entertaining except for Vivia’s and hers is subordinated to her brother Merik’s. Vivia didn’t figure largely in Truthwitch, but here she becomes a POV character with an interesting motivation–she’s trying to run her country while her father is ill, and she’s facing sexism in Nubrevnan society while also struggling with her ongoing grief over her mother’s death and her feelings of rather well-justified resentment toward her brother for the way that he has been given choices, responsibilities, and power that Vivia has had to work hard for. In the whole book, Vivia is the only character who has clearly defined and sensible motivations that are complex enough to generate real interest in her story, but she’s not given much page space and much of it is wasted on her almost obsessive thinking about her unspoken and possibly unrequited romantic feelings for another woman. I love women who love women, and goodness knows we could use more lesbians in fantasy, but this sort of relentless pining with no progression in the relationship is tiresome under normal circumstances. Here, where Vivia is legit dealing with a crisis situation as her country starves while being on the brink of war, her constant thoughts about the object of her affection are just plain intrusive–for Vivia and the reader.

Elsewhere, Iseult and Aeduan’s interactions are a study in what I guess passes for romantic/sexual tension. The difference here is that neither of them seem to have the least bit of self-awareness about their burgeoning attraction. I’m sure all this barely contained wanting to bone is great fuel for shippers and fanfic writers, but again there’s very little forward progress on that front. The revelation that Aeduan shares Nomatsi heritage with Iseult starts off feeling significant, but it never bears any actual fruit in terms of a deeper understanding or fellowship between them. Their physical interactions are too PG to ever be truly sexy, all written with a weirdly puritanical coyness that I found actively unpleasant to read.

They could have been worse, though. They could have been more like the interactions between Merik and his sidekick Cam or between Safi and the hell-bard (and by the way, I don’t think Susan Dennard actually knows what a bard is) Caden. The thing is, while I hate the dull, predictable chemistry between Safi and Caden, and I hate the way that Vaness is allowed to fade into the background of Safi’s POV sections, and I hate Safi’s sort of generalized insouciance and her terrible jokes… I despise Merik and his treatment of Cam.

Cam is a trans boy with what sounds like vitiligo, and he’s clever and brave and loyal and long-suffering. Because Merik is pretty much an asshole to Cam through the whole book about everything. The worst part, however, is just how much time Merik (well, Susan Dennard, really) spends commenting on Cam’s transness. It’s as if Dennard decided to make Merik the mouthpiece for her to work through all her own confused feelings about trans people, and Cam spends most of the book being misgendered inside Merik’s head–until the very end of the book when Merik magnanimously decides that he needs to focus on thinking about Cam with the proper pronouns. It’s not good enough. Cam is obviously trans from the beginning of the book, and Merik’s inability to either understand or accept that for almost four hundred pages doesn’t reflect well on him. It’s only when Merik meets someone who know’s Cam’s original name that things seem to click for Merik, and a ridiculous amount of page space is dedicated to Merik essentially marveling that being trans is a thing.

Being cis myself, I don’t feel qualified to fully unpack all this, but it seems like a particularly ham-handed way of including a trans character. Without any scenes from Cam’s POV, there’s very little insight into how he feels about any of this. The disconnect between the way Merik talks to Cam and the way he thinks about Cam is messed up as well. He’s very particular about calling Cam “boy” throughout the book–which has a weird racial dynamic as well, since Merik codes white and Cam is described as being dark-skinned with lighter patches–but he consistently thinks of Cam as “girl” even though he first knew Cam only as a boy. It’s just a huge mess of a well-meaning (I think) but ultimately insufficient attempt at inclusiveness.

Which is pretty par for the course with this book, which is, overall, a big mess in which almost nothing really works. The things that do work–Vivia’s storyline, Aeduan (though not Aeduan with Iseult)–seem to work almost be accident, not through any particular skill or intention of the author. Honestly, I’m not quite sure anymore what Susan Dennard is trying to do with this series. I might come back for Bloodwitch next year, because I do like Aeduan and am mildly interested to see if anything gets any better, but Windwitch honestly made me question every positive feeling I had about Truthwitch.