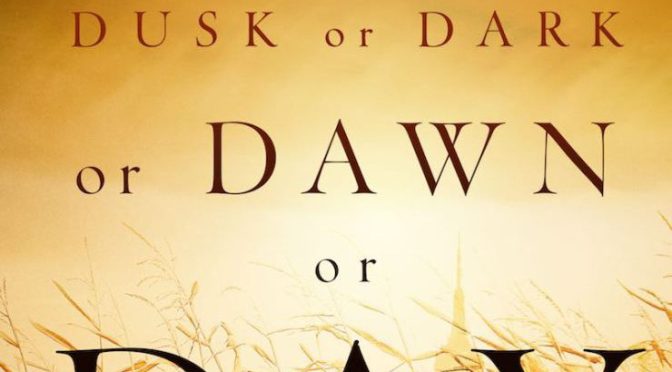 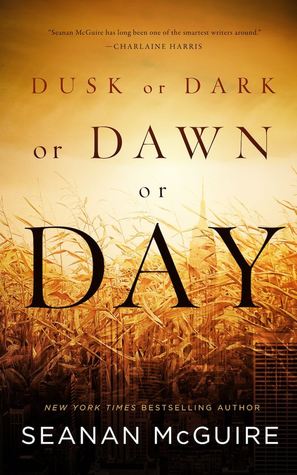 It’s early enough in the year that I don’t have much to compare it to yet, but I feel confident in saying that Dusk or Dark or Dawn or Day is one of the year’s great novella-length works. It’s smartly written, well-paced, has a compelling cast of characters and an original mythology, and is altogether compulsively readable. It’s perfect reading for a cold day or a rainy afternoon, exactly the sort of thing that is easy to zip through in a single sitting like I did.

It might be easy to just focus on the characterization of this book as “that book about the ghost who works at the suicide hotline,” but Dusk or Dark or Dawn or Day is something really special and interesting that isn’t done justice by that facile, humorous-sounding description. Yes, Jenna is a ghost and she works at a suicide hotline, but this isn’t a funny book and, while a fast read, isn’t really the kind of light reading that superficial description would suggest, either. There’s some lightness here, but this is a book that deals mostly with themes relating to grief and mortality and Seanan McGuire has something quite serious to say about these issues. She does touch on some ideas about community and found family, but those are mostly incidental to the story and more implied than explicitly examined in the text.

Because the book is so emotionally and thematically weighty, the plot is a fairly basic one. After the introduction of Jenna’s predicament and some explanation of her life as a ghost, Jenna and her friend, a witch, have to rescue a bunch of other ghosts when they mysteriously disappear. We never meet any of the disappeared ghosts, so there’s not much emotional stake in their rescue, but the book isn’t really about them at all. Instead, the first person narrative puts the reader completely inside Jenna’s head for the duration of the story. And while Jenna is a kind and caring person, there’s an interesting detachment in her ways of caring for her pets (all elderly cats) and the people in her after-life, and McGuire does a great job of exploring how Jenna’s circumstances have changed her perspective and her understanding of life and death.

McGuire also has an interesting take on witches here, where they have magics tied to any number of things–streets, rats, corn… presumably the options are basically unlimited–that fuel their powers and inform and limit their abilities. The relationship between witches and ghosts is complex and adversarial rather than symbiotic, but it adds another dimension to the reader’s understanding of the themes. Like ghosts, witches exist in a social space somewhat removed from humanity, and both ghosts and witches live extended lifetimes and are subject to forces and motivations outside their control. McGuire’s “What If?” question in this book is broad and perhaps ill-defined, but I love the multiple angles from which she’s chosen to try and answer it.

Looking back on the reading experience of this one, I think the genius of Dusk or Dark or Dawn or Day is that McGuire has used an extremely simple and fairly straightforward plot in order to hang a ton of mythology and worldbuilding upon, but she’s managed to do it in a way that feels complete and not as if it’s just an introduction to a bigger fictional world or a longer series. Sure, there’s tons of storytelling potential here, and there is at least one character (Delia, if you want to know) that I’d love to see McGuire return to in the future. But Jenna’s story in this volume is completely self-contained and entirely emotionally satisfying. I would definitely like to read more about this fantasy world, but I don’t think any sequels are necessary. I’d love for these kinds of singularly lovely standalone stories become a trend even more than I want to see sequels or companions to this story.

This review is based upon an advance copy of the title received from the publisher through NetGalley.