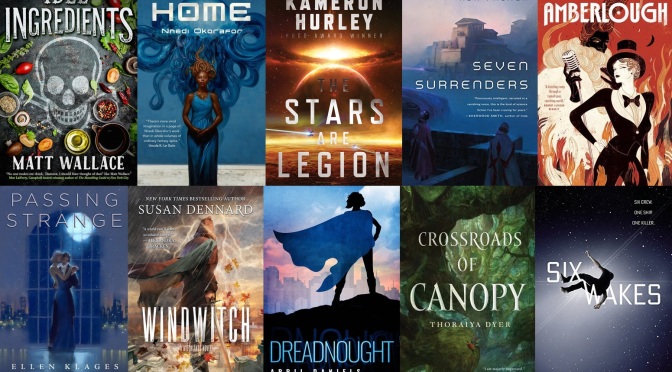 I know it’s a little bit past the actual beginning of winter, but I think from now on I’m just going to break these seasonal reading lists up into more or less three month time periods and name them for the closest corresponding season. It’s just not practical to try and do a full year’s worth of books that I’m excited about, even in January, especially when there are plenty of still-to-be-announced releases for later in the year that I don’t even know about yet. So, this list will get you (and me) through March.

Magazines
I’m starting this year off with magazine subscriptions for the first time in many years. (Like, now that I think about it, I think the last time I regularly read any magazine was Marion Zimmer Bradley’s Fantasy Magazine back in the early ’90s. Yikes.) Here’s what I’m definitely reading (and recommending, natch) in the first few months of 2017:

Tor.com Novellas and Short(-ish) Novels
I plan to continue reading all of these as they are published (or as ARCs if I am lucky and they show up on NetGalley). I know I’ve been full of praise for the last couple of years for Tor.com’s novellas, but I still basically love them. The novella length (and price!) is great for quick reading, and Tor.com publishes a great variety of new and established authors in a good mix of subgenres that offers plenty that I like and enough stuff outside my usual comfort zone to keep things interesting and challenging. After 2016, there are a couple of authors that I will be avoiding in the future because I just don’t care for their books at all, but other than that I expect to keep on reading these faithfully. The first quarter of 2017 has quite a lot to be excited for.

Everything Else
Everything else obviously is the majority of what I’ve got on my TBR list. There are a handful of things here that I’m not 100% sure about, but in order to hit my Goodreads challenge numbers I’ll have to get through most of these. I hope I can, because there’s a ton of great stuff coming out over the next couple of months.