I’d love to say that I loved “The Return of Doctor Mysterio,” especially after it’s been such a long time since we last had any Doctor Who at all. It was an enjoyable enough hour, but of the sort that I rather hate to enjoy because as soon as I think about it for more than a minute it all begins to fall apart. This has long been true of Steven Moffat-penned episodes in general, but this one is even worse than usual. Let’s start with some positives, though. Some spoilers ahead. 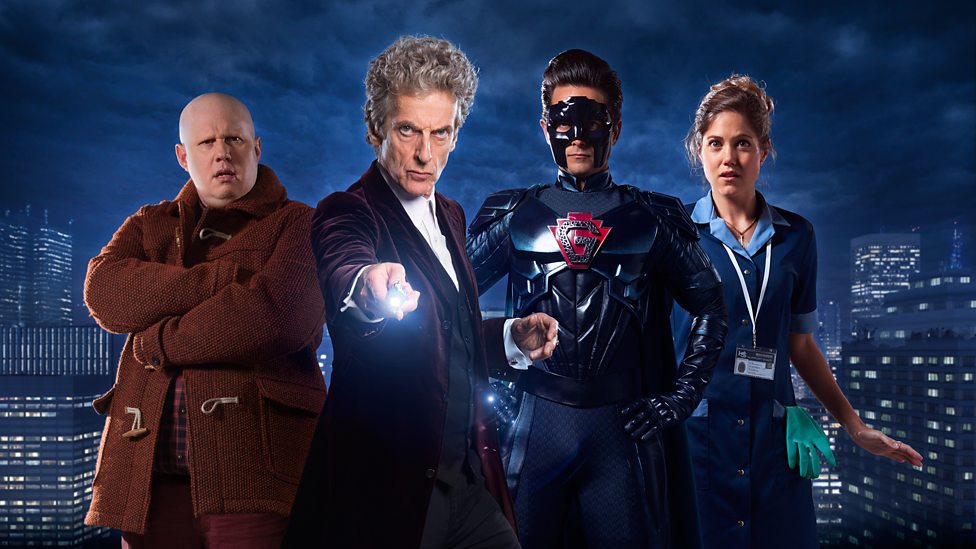 First, “The Return of Doctor Mysterio” has a coherence that has often been lacking in the last couple of seasons of Doctor Who, and it’s refreshing. The episode is internally consistent, makes smart use of time travel, and overall makes good working sense. It also fits nicely within the broader timeline of the show, taking place, for the Doctor, shortly after his last long night with River Song (at the end of last year’s “The Husbands of River Song”) and addressing, sort of, some issues raised in season seven’s “The Angels Take Manhattan.” That said, these previous episodes certainly aren’t required viewing to enjoy this one, which is good. Moffat sometimes tends to show off his encyclopedic knowledge of the show, but there’s nothing too arcane here, just some mostly cleverly-worked-in references for fans who have been paying attention the last few years.

Second, Matt Lucas is back as Nardole, and he’s now the Doctor’s Companion. I’ve liked Matt Lucas for some time and thought it a shame to waste him on a throwaway role in last year’s Christmas special, so I was thrilled to see him get a chance to grow the part again this year. Nardole is excellent as comic relief, but Lucas also injects some much-needed warmth and empathy into an hour that was unexpectedly dark for a Who Christmas special. I understand that Lucas and Nardole will return in season ten as a series regular, and I’m looking forward to seeing how he fits into the Doctor’s adventuring. In this episode, he does spend far too much time on lazily-written expository speeches, but he gets to fly the TARDIS and spend some time ruling 12th century Constantinople (“firmly but wisely”).

Finally, “The Return of Doctor Mysterio” does, despite its significant flaws (which I’m getting to), manage to be fun to watch. Its pace can only be described as “romping”; the hour absolutely flew by, but without the frenetic quality of many recent Moffat episodes. I’ve often felt that Moffat era Who uses breakneck pacing to cover up hole-filled plotting with a shoddy whiz-bang veneer, but “Doctor Mysterio” avoids that, instead keeping things moving along. No fast-talking deus ex machina shenanigans here. Only sensible progression through the above-mentioned coherent storyline. Even the time travel and flashbacks make perfect sense and work well within the story being told. For Moffat era Who, this is a great episode.

What the fuck is “The Return of Doctor Mysterio” supposed to be about?

Is it about the difficulties of being a super-powered human? Not really. Masked vigilante Grant’s (a rather dull Justin Chatwin) point of view is never inhabited by the viewer. Some of his problems and concerns are alluded to, but aside from his puberty-induced x-ray vision, which is played mostly for laughs, his super powers are never an actual problem. Instead, he’s basically invulnerable and his super speed and flying powers make it possible for him to successfully lead a seemingly rich and fulfilling double life. Sure, the Doctor does some handwringing about how hard the double life thing must be, but none of the Doctor’s worries are shown to be well-founded.

Is it about the duality of man (and I do mean man—there’s only a single named, speaking woman in the episode, but more on her later)? Maybe, but if so the messaging here is much less coherent than the surface story being used to communicate it. I mean, something something parallels between the Doctor and Grant and the compartmentalization of their identities as men and as superheroes? It feels as if, by the end of the episode, we’re supposed to feel as if some profound observation has been made and we’ve been given some new insight into the Doctor’s character, but neither of those things have been accomplished.

Is it about poking fun at the absurdity of superhero genre conventions? Only if by “poking fun” one means “playing every trope pretty much completely straight.”

Is it about gender? Could be, but if so it’s a sexist garbage fire of garbled messaging on the issue.

The episode’s singular woman, Lucy (Charity Wakefield, making the most of things), is a sort of Lois Lane character, right down to her apparent inability to recognize the man she has known for over twenty years if he takes his glasses off and does his best Batfleck impression. Lucy starts off promising enough, seeming to be a competent and perceptive investigator, but she’s quickly sidelined once the Doctor arrives, gets sexualized and then damselled in the final act, and ultimately has nothing much to do other than have the wholly unearned epiphany that she was in love with the nanny all along. I’d say that this all amounts to a systemic destruction of the character, but it’s done so casually, with so little appearance of malice and with such an obvious wink and nod from Moffat (as if it’s all a big joke that we’re all supposed to be in on), that I think it’s likely that all these choices are totally intentional. Steven Moffat has always been cavalier in his disregard for Doctor Who’s female characters, with a strong penchant for robbing them of agency and turning them into prize objects to be manipulated by and in service of the always more-important-to-Moffat male characters on the show.

It’s nonetheless perversely impressive to see how efficiently Moffat can squeeze a wildly regressive character “arc” into a single episode. Lucy never does get to fully understand the story that she’s in—indeed, the story that she was actively investigating at the top of the hour. We learn from Grant that Lucy, while married and a new mother, has recently been abandoned by her husband, and this turns out—even though it’s literally never mentioned by Lucy herself—to be the problem in her life that needs solving. Instead of getting satisfactory answers to her questions or succeeding in her investigation of the alien invaders, Lucy’s “happy” ending is a renewed interest in domestic life and faith in monogamous hetero coupledom. Her career isn’t even mentioned in the end, and her emotional energies are directed more towards helping Grant—not to adjust to a new domestic life of his own, though. Rather, she encourages him to at least remain open to the possibility of continuing his super-heroics in the future.

It would be profoundly depressing if Doctor Who still had the power to surprise and dismay me with this crap. As it is, I just found myself sighing and rolling my eyes. Thank goodness, we’ve only got one more year of Steven Moffat to go. And, hey, new companion Bill looks like she has some potential. It’ll be interesting to see how Moffat manages to screw up come April.