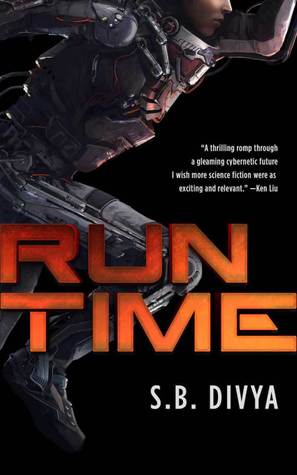 I read all of Tor.com’s novellas, which is a good thing because I otherwise might have missed out on this gem by S.B. Divya. I would never have picked up a story about a cyborg endurance race on my own, but I’m glad I read this one. Runtime is a marvel of world building and character portraiture wrapped around a perfectly executed straightforward plot and just the right amount of smart-but-not-overbearing social commentary. It’s a near-perfect use of the novella length, and I cannot wait to see what S.B. Divya does next.

Marmeg Guinto is as prepared as she’ll ever be for the grueling Minerva Sierra Challenge, but she’s nonetheless not nearly as prepared as some of the other racers, with their support teams and wealthy sponsors. In a race where people compete and win on the strength of extreme body modifications, Marmeg has cobbled together her cyborg enhancements from cheap parts, black market materials, and sometimes literal garbage. Still, she’s determined to race well enough to win a better future for herself and her family. When she actually gets out on the trail, however, things don’t go entirely as planned, and Marmeg soon has to make some hard choices that put her future plans in jeopardy. The surface narrative here is simple enough and fits neatly into the popular genre of stories about young people who participate in extreme sports or contests in order to help their families in dystopia-ish futures. It could have been banal, but S.B. Divya does several things in Runtime that elevate it above the usual stories of its type.

Partly, this is accomplished by cleverly adding layers of meaning and nuance to a simple story. Within the simple framework of the race/survival story lies a cleverly integrated fable with something to say about cheating and good turns. Wrapped all around the story and built into the fabric of Divya’s excellent world building is some insightful social commentary about capitalism, gender, immigration, and community. It sounds like a lot, but it never feels like too much for the reader to take in. There’s never any obvious lecturing or moralizing, which is often a mistake made in these kind of stories, and the ending is satisfying and thematically appropriate without feeling pat.

The heroine, Marmeg, also accounts for a great part of Runtime’s appeal. She’s a nicely complex character but without falling into either any of the common Strong Female Character tropes or the common Morally Grey Character tropes. Instead, she’s highly distinctive, with a backstory and personality that are both well-considered and well-constructed. The key here is the specificity of this character and her background. Marmeg isn’t a Generic Dystopian Heroine, and the reader’s understanding of her situation, her family, and what she’s willing to sacrifice for them is absolutely necessary for the story to work. Fortunately, Divya communicates all of this information clearly and concisely with sparely elegant prose that is perfectly styled for the story she’s telling.

Where S.B. Divya excels most notably, however, is in simply balancing all the many moving parts of this novella. The race itself necessarily takes center stage, but Marmeg is a strong enough personality to really carry the story by getting the reader invested in it. There’s a nicely cinematic quality to the action, enough to earn this little book a place on my ever-growing list of things I’d like to see adapted for film or television. Marmeg’s peril feels like a very real threat, and there are a couple of small subplots that nicely augment the main story and could provide fodder for more stories or even a full-length novel in this same universe. Every piece of Runtime is meticulously crafted and fitted together with every other piece in order to make a whole that is even greater than the sum of its parts.

One thought on “Book Review: Runtime by S.B. Divya”