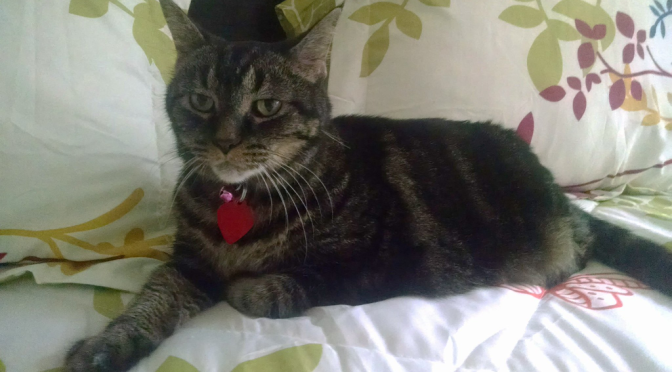 So, I am completely over 2016 already. In a year that has already been full of illness, stress, death, and grieving, this week added one more to the pile. Isabelle, the cat that we inherited from my partner’s late mother, passed away unexpectedly. In hindsight, I think she was probably sick–she’d been not eating very well for a couple of weeks, but I’d chalked it up to a change in her food and my daughter being out of town for a week–but two vets had looked at her and said she was healthy less than two months ago, so there’s really no telling what happened. She was mostly unfriendly and highly neurotic, she only really seemed to bond with my daughter, and we didn’t have her very long, but we loved her and we miss her.

I feel like most of this year (and part of last year, what with breaking my foot) has just been about me justifying why I haven’t accomplished things I intended to do or explaining away my lack of productivity, but come on. It really has been a fucking doozy. It’s like every time we return to some type of normalcy, another thing happens to derail things. So, it’s been a sad week, really. It started off okay, but quickly went straight to hell, and the last few days have been spent largely just feeling sad (and sore–turns out gravedigging is hard, even for a cat), reading (An Accident of Stars by Foz Meadows), and playing video games (No Man’s Sky).

Still, I did manage to find a few things of interest on the internet this week.

Uncanny Magazine‘s Year Three Kickstarter has just over two days left, and they’re well into stretch goal territory now. Sure, you can buy the issues later, but if you support it now, you’ll help ensure that each issue is extra-full of great fiction and essays.

Meanwhile, Ragnarok Publications’ just started a Kickstarter for Hath No Fury, a new anthology of stories with female protagonists:

Naomi Novik’s Uprooted is the winner of this year’s Mythopoeic Award.

Sady Doyle’s piece on Suicide Squad encapsulates about 80% of why I’m in no hurry to go see it. (The other 20% is Jared Leto.)

Tor.com lists 10 SFF anthologies in translation from around the world.

Renay at Lady Business came up with this list of 60 essential sci-fi and fantasy reads, and it’s pretty much my favorite thing of the week.

Sarah Gailey’s essay “In Defense of Villainesses” is pretty great, too, though.

If you aren’t reading Marjorie Liu and Sana Takeda’s comic, Monstress, you ought to be. Then you should go read this profile of them over at the B&N Sci-fi and Fantasy Blog.

N.K. Jemisin’s The Obelisk Gate is probably my most-anticipated read of 2016, and it’s coming out in just a couple of days. Lit Hub takes a closer look at the radical sensibility that sets this series apart from so much other epic fantasy.

Mythcreants has some tips for creating realistic cultures.

Finally, a new trailer for Rogue One dropped, and it looks amazing: