Faith had me at its gorgeous cover art, particular for issue two, which is so beautiful and so joyful that it makes me happy just looking at it. The comic itself is delightful fluff, not devoid of depth and meaning but bright and optimistic (yet without being Pollyannaish). I’ve never been particularly interested in superheroes, and the last couple of decades’ trend towards darkness, grittiness, antiheroism, and generalized cynicism has turned me even more off of the genre. In that landscape, Faith is a breath of fresh air that makes me wonder what else I might be missing by so completely avoiding super hero comics.

The thing that first put Faith on my radar was its titular character, who is a fat geeky woman—something that makes her a character very close to my heart. As I said, I loved that cover art, which does nothing to hide or minimize its heroine’s size, instead showing her as beautiful, strong and heroic, reveling in her abilities. I love how much space Faith takes up in these covers, and I love how unapologetically she seems to do it. They’re powerful images for me, a large woman in my almost mid-thirties, and they’re the kind of images that I’m glad exist for younger women and girls.

The interior art is similarly excellent. The artists are clearly unconcerned with making Faith conventionally pretty which makes her feel more real and gives the book a nice, naturalistic, relatable quality that supports its story of a young woman reinventing herself after some personal upheaval. Faith is also not sexualized, though she is sexy and at times sexual, and it’s refreshing to see art that is so free of any demeaning, leering male gaze. 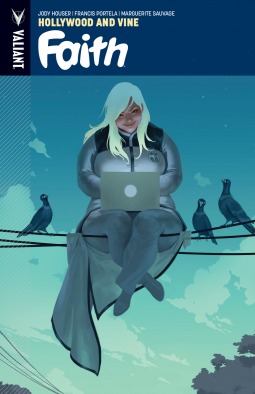 Faith’s geek status is a major part of her relatability as a character, and it also makes the comic a bit of interesting meta commentary on comics, fandom, and geek culture in general. After some personal upheaval, Faith hangs up her cape (theoretically, anyway) and moves to Los Angeles to be a pop culture blogger before she’s forced by circumstance to put her costume back on and get back into the superhero game. It’s not unusual for superheroes to have secret identities, and even Faith’s job in media isn’t unusual, but her particular situation is uniquely and distinctively of the early twenty-first century. I have a feeling that, years from now, this is going to date this book, and it’s possible that it won’t hold up well to the test of time, but it’s a specificity that adds to the authenticity of Faith’s earnest storytelling. You can tell, both in the art and the smart, funny writing, that the people behind this book really care about geek culture and have a good amount of inside knowledge.

None of this is to say that Faith is a perfect comic. Mostly, it just can’t be all things to all people. It tries with regard to diversity, but the reality is that it’s still showcasing the adventures of a relatively privileged white woman. While Faith is wonderfully relatable to me (another relatively privileged white woman), she also highlights to me how much more and better diversity is still needed in comics, and in pop culture in general. Faith also doesn’t tackle any particularly meaty material; the total lack of cynicism in the book is nice, but some readers may find it too light on substance (though I can’t state enough how much I love that there’s nothing in the book about body image issues—that’s one tired theme I can do without forever).

Finally, it might be a nitpick, but I think also worth pointing out that the title of the comic, Faith, and some of the vaguely religious styling of some of the art (like on #2, where Faith has almost a halo and is surrounded by white doves) could be off-putting for some. While I generally don’t avoid everything with Christian overtones, I know that was imagery that gave me pause, even if I did find it pretty to look at. It made me unsure what to expect to find in the book, in terms of themes and messaging, mostly. As an atheist (albeit pretty lowkey these days), I don’t like to be preached at, and that imagery definitely gave me pause and 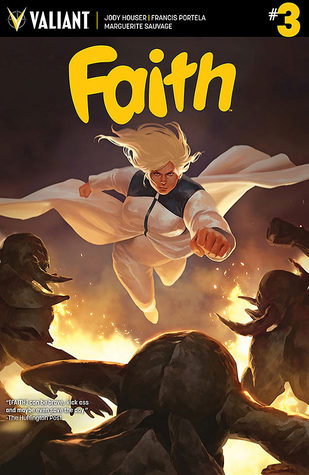 led to me putting off reading the book for longer than I otherwise might have.

Still, Faith is a book that’s worth checking out, falling squarely in “superhero comic for people who don’t like superheroes” territory. It hasn’t exactly motivated me to rush to read more superhero books, but it has reassured me that there’s something for me in the genre after all.