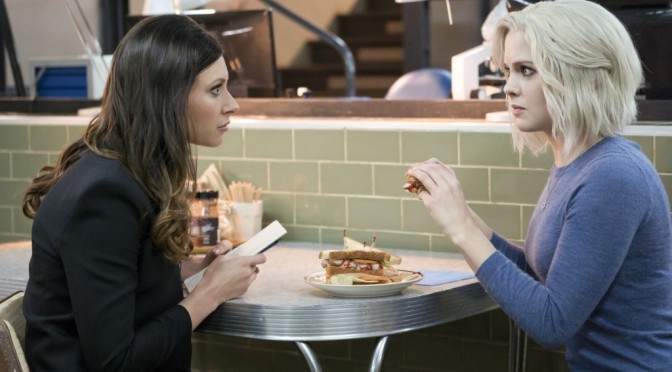 iZombie just gets better and better as it works its way towards the end of its second season. Like pretty much every episode these days, “Pour Some Sugar, Zombie” is jam-packed with important events, and that’s even without Drake, Mr. Boss, or Vaughn around to distract from the main characters. Smartly, this episode focuses primarily on Liv, Ravi, and Major, a nice change from last week which was very close to being entirely overstuffed.

The first and most exciting big news of the week is that Peyton is moving back in with Liv. I love that this wasn’t rushed, and the scene with Major and Ravi having drinks with the girls after helping Peyton carry boxes is just the beginning of a whole series of scenes this week that serve double purposes. In this case, it’s good to see the gang together and being friends—which is, incidentally, a great way to work in a somewhat dated reference to Friends—and the scene also introduces this week’s murder victim and sets up the case that Liv will be working on for most of the rest of the episode.

The case seems to be a pretty straightforward one to start with, and Liv isn’t even planning on eating Cassidy’s brain until Peyton shows up at the morgue to put in a special request. Unfortunately, the idea of Peyton hanging out with stripper brain Liv is much better than the execution of it here. There are elements of this sequence that I like, but it relies more than a little too heavily on stereotypes about dancers, made especially uncomfortable to watch by the fact that all of the dancers that appear in the episode are women of color, which adds a weirdly racialized tone to the stereotyping. Liv giving Peyton a lap dance could have been really funny, but instead it was just awkward, and not in a particularly fun way to watch.

The most compelling part of the episode actually ends up being Ravi’s journey to figuring out that Major is the Chaos Killer. This storyline is paced perfectly over the course of the episode so that the logical end of it, when Ravi finally confronts Major with his discoveries, feels organic and earned, a perfect dramatic payoff after a season’s worth of letting this hidden tension fester in the background. I like that Ravi doesn’t immediately go to Clive or Dale (or even Liv) when he figures it out, but instead confronts Major about it directly, and that it triggers Major’s reversion to zombie form makes it a great visual moment as well as a great emotional one.

In other news, after taking Ravi’s newest zombie cure last week, Blaine is no longer a zombie. However, he’s also no longer quite himself, either. There’s a lot of potential here for new directions in Blaine’s character growth, but I’m also somewhat concerned that this could be a prelude to writing him out of the series somehow, especially with Don E and Chief likely picking up the reins of Blaine’s business. That said, it seems much more likely that Don E and Chief’s move against Mr. Boss is going to fail spectacularly one way or another. My guess is that they are going to screw up big time in a way that helps to bring the conflicts between the show’s various factions to a head, and Blaine—either with his memory restored or not—will save the day somehow.

Also this week, after spending most of the episode bemoaning how she misjudged Drake, Liv finally finds out that he’s not a crook at all, but an undercover police officer. This is nicely seeded early in the hour when one of Drake’s handlers from vice shows up to ask Liv about him, but she ultimately finds out when she goes to visit Drake’s distraught mother. What remains to be seen is whether or not Liv actually does anything about this, especially in light of Major now being a zombie. As much as I, for the most part, dislike Liv and Major together, it’s a foundational fact of the show that the only reason they aren’t happily making little Livs and Majors now is because Liv is a zombie. Surely, this Chaos Killer business will get sorted out somehow, and then I expect Major and Liv to be interested in each other again, which makes Drake’s place on the show a little tenuous. I only hope he doesn’t go the way of poor Lowell.

With three episodes left in the season, there’s still a good amount of very tangled story left to unravel, but this episode has made some real headway in getting things set up for a wild ride of a season finale.