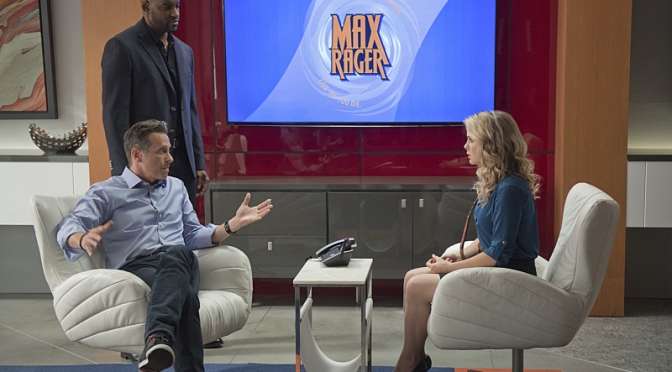 I’m pretty sure I had a permanent look of delight on my face throughout this entire episode, which managed to squeeze an enormous amount of story into its 43 minutes—including a ton of set up for the final four episodes of the season, which I can already tell are going to be a wild ride. “He Blinded Me… With Science” might be my favorite episode of this show to date, to be honest; it’s certainly the best episode of this season, and it included some of everything I love about iZombie except for Peyton. There was even a somewhat minimal amount of Major this week and signs that all of Major’s chickens will be coming home to roost very soon. Of course, it looks like everyone’s chickens are coming home to roost, so it’s not exactly like Major is exceptional in this. There’s just a bonkers amount of plot this week, with an equally bonkers amount of character work, all leavened with liberal amounts of wry humor.

This episode is dominated by its villains, however. Both Blaine and Vaughn get significant amounts of screen time and some big developments in their respective plots. After an excellent cold open that introduces Liv’s case of the week and contains more than one great Ravi line, Liv leaves with Clive just in time for Blaine to show up covered in dirt and wrapped in a blanket. Blaine needs brains, clothes, and an Uber, all of which Ravi helps with, but not before delivering some more bad news about the progress—or lack thereof—on the zombie cure front. The rest of the episode sees Blaine dealing with this information and essentially making his final arrangements, from giving his henchmen the keys to the business to picking out a casket. Ravi does come up with another untested version of a possible cure that he gives to Blaine, and our final shot of Blaine this week is him injecting himself with it.

Vaughn, on the other hand, is becoming increasingly erratic and crazed under the influence of copious amounts of his own energy drinks. This episode sees him try to attack Major after giving a positively manic speech in which Major learns that Rita is Vaughn’s daughter. Vaughn manages to mostly keep it together when he’s interviewed by Clive and Liv about their dead woman, and he’s even more or less normal when he catches a disguised Liv snooping around Max Rager’s labs later on. However, things get weird when Vaughn and Gilda are down in the not-technically-secret basement after hours. Vaughn harasses one of their zombie test subjects until she breaks free, kills a scientist, and then comes for Vaughn and Rita. Vaughn manages to escape, but only by abandoning Rita to her fate. When his daughter manages to fight her way free of the zombie, Vaughn has locked himself in his office and refuses to let her in. He’s clearly shaken by this experience, but it’s pretty much impossible to feel bad for him. Rita, of course, is slightly more sympathetic here, but I’m much more excited to hurry on to next week or whenever we find out what zombie Rita is going to be like.

Liv actually has a lot going on herself this week, but she almost fades into the background in the face of all the Blaine and Vaughn stuff which is much more interesting than the case of the week. Still, the case—with a twin twist!—isn’t bad, and it leads Liv much closer to figuring a whole lot of things out. I don’t love her slightly creepy stalking of Drake, though. Liv’s love life has been a common thing for the show to explore this season, and the show always seems to tie her bad relationship behavior to the brains she eats, but at some point I feel like we have to start to accept that Liv just isn’t great with relationships. The thing is, I would be fine with that just as a part of Liv being a complex and flawed character, but the show seems to want to play this stuff for laughs and consistently shifts all responsibility away from Liv instead of really examining how kind of messed up Liv’s trust issues are and how they are negatively impacting her life, which could be really compelling if the writers would spend some time on it.

Overall, though, “He Blinded Me… With Science” is a top notch hour of television that leaves things nicely set up for the rest of the season. The show is juggling an awful lot of stories right now, but it’s managing, and we’re seeing all of iZombie’s scattered threads starting to converge. Next week, Peyton is back and I expect that we’ll see even more connections made and possibly even a couple of things made clear after this week’s string of near-revelations. I can’t wait.