March is here, and we’re now really getting into good new fiction season. Even though there are far more new releases than I’m even capable of keeping up with, I wrapped up two final novels from 2015 this week–Archivist Wasp and Barsk: The Elephants’ Graveyard. Barsk was nominated for a Nebula, and Archivist Wasp has been getting a good amount of awards buzz as well, so I thought I’d check them out in time for Hugo nominations. Over the next week or two, I’ll be reading a bit of short fiction and one more 2015 novella, and then I will be making a short-ish list post or two before I send in my final lists.

The John W. Campbell Award can be a little trickier to nominate for, but this year it’s being made somewhat easier by Bad Menagerie’s Up and Coming anthology, with collects some representative short stories from many of the currently eligible authors. Up and Coming: Stories by the 2016 Campbell-Eligible Authors is out now and will be available as a free download through March 31.

The nominees for this year’s Spectrum 23 Awards were announced this week.

io9 has a great list of all the books we should all be looking forward to in March.

But, wait! Fantasy Faction has a list of small press titles to keep an eye out for as well.

The American Gods adaptation finally has its Wednesday–and it’s Ian McShane, which is pretty exciting.

Meanwhile, over at the Wertzone is the first post I’ve come across so far talking about Star Trek‘s impending 50th anniversary.

At The Toast, three adults have a serious conversation about The Hero and the Crown. 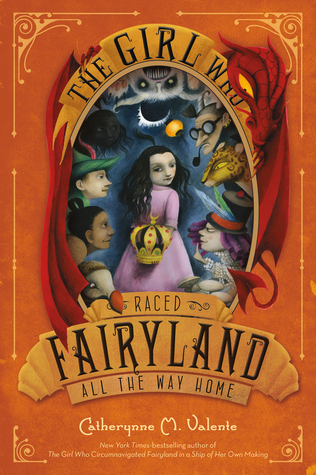 The final installment of Catherynne M. Valente’s Fairyland series–The Girl Who Raced Fairyland All the Way Home–came out this week, and Valente was on the Once & Future Podcast to talk about it.

Mary Robinette Kowal has a new novella coming out on Tuesday from Tor.com, Forest of Memory, and she was on Midnight in Karachi to discuss it. If you can’t wait for the new book or don’t know who she is, you can read her wonderful novelette, “The Lady Astronaut of Mars” online for free right now.

Alex Marshall’s identity was revealed this week when he was interviewed by Kameron Hurley over at Medium.

This month’s Clarkesworld has a great interview with Charlie Jane Anders.

I loved Victor LaValle’s The Ballad of Black Tom, and he’s still doing some interviews to promote it. This week, he showed up at Vice and on NPR to talk about his book, Lovecraft, and racism.

In a similar vein, Jim C. Hines has a great piece in this month’s Uncanny Magazine about “men of their times.”

Fandom Following has a great piece on women in Middle Earth–and how bad being one would be.

Lady Business has a must-read post about the tyranny of the “do it yourself” mentality that so often characterizes responses to complaints about lack of representation.

This new Van Gogh biopic–animated with oil paintings by over a hundred artists–looks amazing: