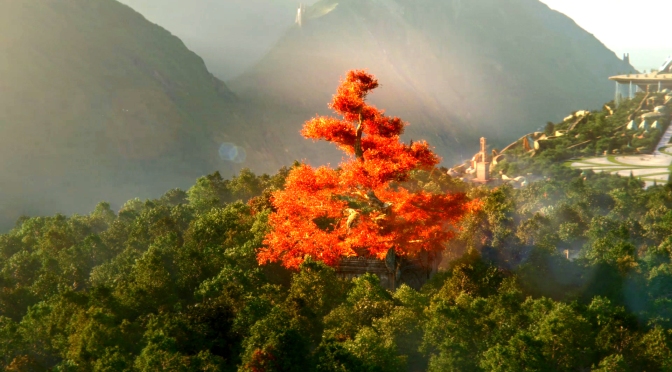 The most frustrating thing about The Shannara Chronicles, all along, has been that its occasionally really great, which only makes its failures more glaringly obvious. “Ellcrys” is—surprisingly, after a half dozen increasingly terrible hours—mostly excellent. Only mostly, though, and where it fell short, it fell really short.

The first problem occurs right out of the gate this week. Because the show spent so long getting to the events of “Safehold,” that left our heroes, at the beginning of the season finale, at their farthest point away from Arborlon and the Ellcrys, but still with their quest only halfway done and a whole army of demons between them and their goal. So things are kind of necessarily rushed, with Wil resurrecting Eretria, Eretria reopening the portal that Amberle had disappeared through, and then all three frantically racing back out of Safehold. Of course this is when the trolls finally wake up—possibly stirred by all the noise from last week’s fight with a couple of shrieking witches—and come out to play, giving Eretria the chance to be a big damn hero and save her friends.

On the one hand, I kind of love this bit. Eretria has gotten a relatively coherent character arc this season, and we’ve seen her go from being a self-serving opportunist out to free herself from her enslavement to Cephalo to being part of a team of friends and willing to sacrifice herself for a greater good. Even if not every step of Eretria’s character growth has been fully realized, I think her heroic moment was mostly earned. It also doesn’t hurt that Eretria’s fighting with the trolls is a nicely executed action scene that was great fun to watch. On the other hand, Eretria’s apparent self-sacrifice neatly serves to cut her entirely out of the story for the rest of the hour, which sucks. Oh, and not only is Eretria cut out of all the action and excluded from the final completion of the quest, she ends up captured by the trolls, and the season ends on a cliffhanger as she sees someone she recognizes, which is awful cryptic for a show that doesn’t have a confirmed second season yet.

Amberle and Wil’s actual journey back to Arborlon is mostly uneventful and includes like two straight minutes of them riding horses on a beach at sunset with their hair streaming gloriously behind them. It’s probably the cheesiest sequence the show has done to date, but I kind of loved it, lens flares and all, because it was so entirely unironic. When the pair finally get back to the woods around the elven (I am not spelling that with an “i”) capital, though, the find the area already overrun with demons. Amberle leads Wil to a cave where they hole up until dark.

While they wait, Amberle tries to confide in Wil about what she learned at Safehold about her role in saving the Ellcrys, but she’s not ready yet for full disclosure. Instead, she confesses that she loves him, and they share a passionate afternoon of lovemaking. When they finally move on after dark, Amberle is now content and prepared to go meet her fate, although Wil still doesn’t know about what she’s got to do until the last moment. Poppy Drayton and Austin Butler turn in some of their best performances in this finale, but their sex scene is the opposite of sexy. It’s not that they don’t have any chemistry, either. The scene is very short, and it’s basically just blurry writhing bodies with a fade to black. It’s not very visually interesting, and this lessens any emotional impact it might have had. If they were going to just fade it to black and have the pair wake up later in the evening, they could have spent less time showing any of the actual sex. If they really felt the sex was important to explicitly include, they ought to have shown a little more. It’s definitely not the worst thing this show has ever done, but it stood out like a sore thumb in an otherwise nicely shot episode.

The biggest surprise of the episode was the big battle scene in the woods outside where the Ellcrys is kept. I was fairly certain that we’d get a pretty epic battle in the finale, and I wasn’t disappointed. Certainly it wasn’t on as grand a scale as anything on Game of Thrones, but it looked good. There was a big enough crowd of extras to add some sense of size, and the fighting is well-choreographed in low key, naturalistic sort of way. It didn’t feel real, but it did feel like just the sort of good epic fantasy battle that I would have liked to see a little more of over the course of season. Unfortunately, both of the battle’s climactic moments were deeply flawed.

Before the actual fighting starts, Ander and Commander Tilton have a sweet moment where they seem to rekindle their romantic relationship. It’s a brief scene, but it was nice. Both of these characters have been grieving the loss of Arion, and this scene gives us some hope that with time they will heal and have a future together. Nope. Turns out that Arion has been possessed by the Dagda Mor and forced to fight in the demon army. He kills Tilton, then begs Ander to kill him, which is sad, I guess? I was kind of shocked by Tilton’s death, if only because it seemed so wasteful—the character was sadly underdeveloped—and such a betrayal of the expectation built by the earlier scene between Tilton and Ander. It’s also pretty shitty that the only significant woman of color on the show just got fridged.

It was surprising to see Arion come back, as well, since it wasn’t really foreshadowed or anything. Sure, we never did technically see his cold, dead corpse, but we also haven’t seen hide or hair of him since he got himself stabbed by the Dagda Mor. Mostly, though, this just speaks to the fact that we have no idea how the Dagda Mor’s magic works or what he’s capable of. Without even a basic knowledge of the Dagda Mor’s capabilities, there was never any reason to expect something like this, so when it happens, it feels random and, well, not meaningless, but a cheap ploy to elicit an unearned emotional response from the audience.

Speaking of the Dagda Mor, the other major climactic moment involves him. Namely, his fight with Allanon, which was a letdown to say the least. It was just as solidly produced as the rest of the fighting in the episode, but it just didn’t feel like the final boss battle that it ought to have. Instead, Wil distracts the Dagda Mor with the elfstones, and Allanon chops the Dagda Mor’s head off. Easy peasy, and by this time Amberle has become the new Ellcrys and all the rest of the demons just vaporize, putting a swift end to any further combat. This all occurs depressingly quickly after Tilton’s death, as well, so if only everyone had moved just a little faster she could still be alive. In any case, this one final fight should have stood out a lot more than it did. It was mediocre at best, and thus anticlimactic.

The final, if not biggest, problem with “Ellcrys,” of course, is (once again) Bandon. Whereas the other major invented-for-the-show character, Commander Tilton, was just sadly underutilized and had her potential squandered by poor writing, Bandon is an invented character that just doesn’t work. His descent into darkness is poorly thought out and executed in a shoddy fashion. His continued victimization of Catania (another terribly implemented character) is uncomfortable and unpleasant to watch. Overall, we just don’t learn enough about Bandon to become attached to him, so his turning evil isn’t particularly emotionally impactful. To top it all off, this week Catania blames herself for “failing him” and Allanon doesn’t contradict her; he just replies that they “both” did. Which is infuriating.

Still, I was happy that they kept the ending of the book, with Amberle becoming the new Ellcrys. I wasn’t at all sure they would, since it’s intended to be an ongoing series, and by the end of last week I was somewhat concerned that they were going to replace Amberle with Eretria. The battle scenes were suitably grand, though not as much as one might wish. Even the cliffhanger-y ending is tolerable, as it shows confidence that the show will be getting a second season—although if “you” turns out to be Cephalo I will lose my shit.

All in all, though, “Ellcrys” is a solid finish to a wildly inconsistent season of television. It had all the things that I loved about this show in the beginning and very little of its worst tendencies on display. I won’t make any promises, but I could see coming back for season two if nothing else better comes along between now and then.