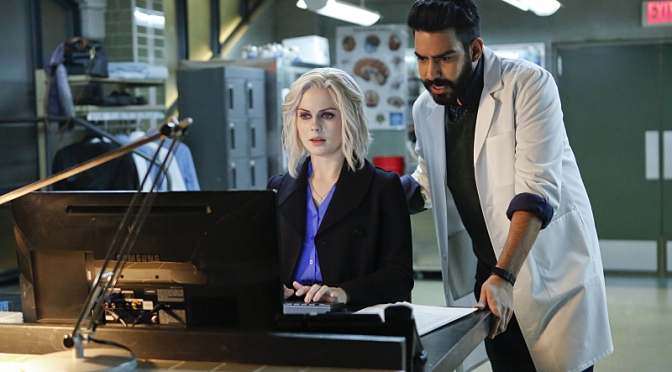 “Physician, Heal Thy Selfie” is by far my favorite episode of season two, and maybe of the show so far. There’s just so much great stuff going on here, with Peyton playing a big role, Blaine in the same room as Stacey Boss, more Vaughn Du Clark, and basically all the story lines being tied together in a big way. While I generally enjoy iZombie, it’s been a while since the show has had an episode that is this close to perfect.

This episode gives Peyton so much screen time, you guys. It’s the first time that she’s felt this much like an integral part of the show, and I wish we could get this much of her more often. One of the episode’s best scenes is when Peyton and Liv confront Blaine together, and it’s a display of solidarity between the two women that does more make their friendship feel real than a season and a half of verbally being told that they are best friends. Peyton’s scenes with Ravi are also wonderful, and should give Peyton/Ravi shippers plenty to fantasize about this week.

It’s a great week for villains, and all of the show’s baddies get things to do. Major is dealing with Vaughn, who uses his time this week to reassert his dominance over Major when he finds out that Major hasn’t been as diligent in his zombie-killing as Vaughn wants. This is the one story line this week that still seems somewhat disconnected from the rest of the show’s events, but the scenes work well enough on their own that they don’t need to be particularly tied to everything else just yet.

Meanwhile, Blaine has bigger problems than Peyton not wanting to bang him again. When Blaine’s funeral home is handling the funeral for Stacey Boss’s nephew, Boss realizes that Blaine is still alive and takes some time to calculate the interest on Blaine’s debts. Fortunately for Blaine, Boss hasn’t realized yet that Blaine is the new major drug dealer in town—although Liv does by the end of the episode. In any case, Stacey Boss and Blaine in the same room together is one of the best things that could have happened on this show, and it’s everything I imagined it would be.

The case of the week in this episode is used really cleverly, and it’s good to see the show mixing things up a little in the way it handles Liv’s brain-eating. Three headless bodies means that the brain Liv eats this week has nothing to do with the case, but she still has to deal with having some of the personality traits of a social media-crazed Millenial. I only wish that the few jokes that this generates were as clever as the general idea of showing that Liv has skills that can help her solve cases even without the unfair advantage she gets by eating the brains of murder victims. I might have chuckled a little when Liv Instagrammed her sushi (#BrainFood!), but the concept quickly wore thin.

After a lot of episodes this season that seemed dedicated to pushing all of the characters and stories farther apart from each other, I’m happy to see things coming back together. I won’t say that a resolution to anything is in sight, but after this week I do feel like everyone is in the same story instead of in two or three different ones.

Great lines in this episode: