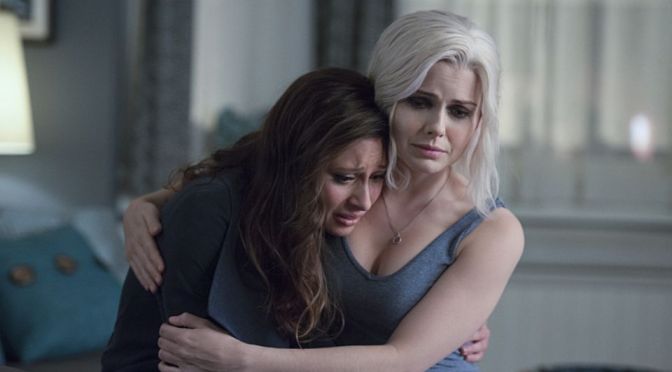 iZombie is an almost frustratingly consistent show, and this second season has been one long line of good-but-not-great episodes. With the magnificently titled “Fifty Shades of Grey Matter,” we can add another one to that pile.

This week’s murder victim is an actual sexy librarian, murdered practically on the eve of the publication of her first novel—a delightful piece of erotica about a sexually adventurous flight attendant titled Upright Position. As much as I love everything about this premise, I was terribly disappointed to find that the show had wasted Kristen Bell’s “cameo” on having her read the Upright Position audiobook. This is somewhat redeemed by having Kristen Bell read the phrase, “I’m going to show you why it’s called the cock pit,” but still. Considering how much the show was using this as a promotional tactic, it was kind of a letdown.

As with most of season two’s murder mysteries, this one takes a decided back seat to the show’s overarching storyline, and the murdered woman, whose name actually completely escapes me, she was so irrelevant, is much less interesting than literally everything else that happens this week. This isn’t helped in the end by the revelation that the husband did it. Because of course he did. Frankly, there’s so much else going on that I barely even noticed.

The biggest news of the week is that Peyton was back, still working on building her case against Stacey Boss, still depending on Blaine as her primary source of information. This gets complicated when she decides, for some reason, to sleep with him, and then it’s even more complicated as Clive and Dale make a move to arrest Blaine as a suspect in the recent spate of high profile murders in town. Peyton manages to get Blaine off the hook for that stuff only to find out via Liv that Blaine really is a pretty villainous character. This is surprisingly devastating stuff to watch, considering how little of Peyton we’ve seen this season. I never know how much to care about her, since she floats in and out of the narrative pretty randomly and never stays for long.

Elsewhere, Major has to dump Minor to avoid being caught because of the dog’s gps tracking implant—which isn’t an implant at all, so he gives the dog up for no reason. My only hope is that at some point Ravi is going to realize how increasingly bizarre Major’s behavior has gotten and figure things out.

Now that I’m actually breaking things down, I’m forced to admit that not a whole lot actually happened this week. The sexy librarian brain led to a couple of funny interactions, and it was nice to see Peyton back. Liv and Peyton both get laid, but then they’re both sad about it, and Liv doesn’t even know yet that her new boy toy is working for Stacey Boss. There’s no progress on the zombie cure front, and we don’t get to see Gilda/Rita or Vaughn du Clark.

Still, it’s a solidly entertaining hour that does a lot of what iZombie does best. Namely, coming up with truly clever puns and keeping all its characters mostly miserable. We’re now halfway through the season, though. It would be nice to see a little more forward movement in all of the show’s plots.