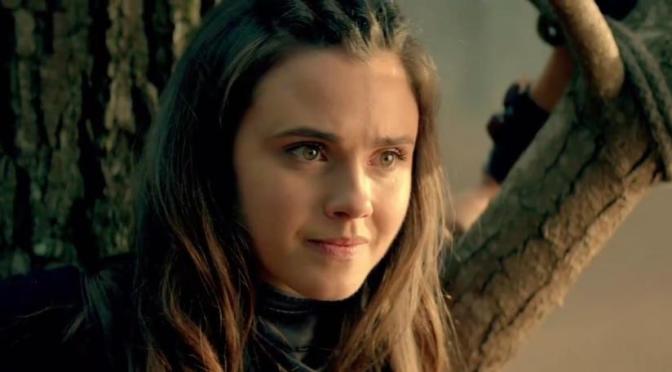 Right, so I kind of love this silly show in a way that makes me inclined to forgive quite a lot of its faults, but this episode is a mess of bad storytelling, poor decision-making, absurd dialogue, rape threats for shock value, and just general time-wasting. All of these (except the rape threat stuff—that’s new) are problems that existed in the first four episodes of the show, but never enough to completely bog the whole thing down the way we see in “Reaper.”

The disaster starts right out of the gate with an extended pre-credits flashback that does nothing to further the story. It does finally give us a look at the gnomes (cool-looking, in a vaguely steampunk-y way) and offers us some new insight into Amberle by showing us a glimpse of her relationship with her father, but it’s altogether just too long a break in the action. We’ve been waiting for weeks to see this quest actually get started. Last week’s episode, “Changeling,” was actually a step backward, with the whole party returning to Arborlon, but the final scene saw our heroes finally going somewhere. It was extremely frustrating to have to sit through a lengthy flashback before we even get to see what Amberle, Wil and Eretria are up to. It does introduce the gnome, Slanter, who looks to be playing a significant role going forward, but this could have been done in some other way that would be a less irritating diversion from the main plot.

Speaking of diversions from the main plot, perhaps the worst example of time-wasting this week was all of the stuff with Bandon. I wasn’t entirely sold on this character before, but now I kind of hate him. His trying to learn how to control his powers might be interesting if it was the focus of a whole show of its own, but here it’s simply a distraction, and a fundamentally boring one. This is compounded by pairing him with Catania, another character created for the show and who has no discernable reason for existing at all. I suppose mentoring Bandon might give Allanon something to do, but he could be advising Eventine, mending fences with Arion, or just not be taking up screen time that could be better spent elsewhere.

When “Reaper” finally does focus on the quest plot that should be driving the show, it’s still a wreck of, well, notably less than epic proportions. Less than a day out of Arborlon, our heroes find themselves under attack by Rovers, although calling what ensues a battle would be highly dishonest. Before the elves can do anything whatsoever, Cephalo has swords to their necks, and he and his band quickly tie up Wil and the elven guards but make off with Amberle. This is where things go very wrong, on multiple levels.

Honestly, this is just shoddy on a storytelling level. Unless something has changed since the last time Wil and Amberle were captured by Rovers, there’s no reason to feel like they’re in any real danger this time around. Logically, you’d think that they’d be even better positioned to defeat Cephalo once and for all with at least a half dozen fighters with them, but they’re neutralized so early they don’t come into play at all. Instead, the show’s writers decide to introduce an entirely new element of peril by having Amberle separated from the rest of her group, ostensibly to be sold into slavery. This may indeed be Cephalo’s ultimate aim, but first he’s going to try and rape her, which is a thing he’s done plenty of before, if we’re supposed to judge him by the way he talks about how he’s raped other women. This is a huge problem.

First of all, it’s just plain tiresome to see yet another young woman in yet another fantasy show being subjected to an ultimately senseless (in every sense of the word) attempted rape as a way of (supposedly) raising the stakes. It’s not even successful at that in this case, since it’s basically a foregone conclusion that Eretria is going to come back and save the day—which she of course does. This is just the beginning of this cornucopia of awfulness, though.

The worst part about this all is the differences in the way the show treats the characters and the narratives that are created around them. Amberle has been presented for almost two full episodes now as unreasonably paranoid, irrational, and haughty, and it would be easy to see her abuse and degradation at the hands of Cephalo as Amberle being “put in her place.” This is further supported by the fact that she has to beg Eretria for help, and the other girl lets Amberle believe that she’s been abandoned before swooping in at—literally—the last possible moment to effect a rescue. At the same time, while the episode seems to try and frame Eretria as a hero for rescuing Amberle, it’s explicitly stated more than once that the reason Eretria came back was for the promise of riches from the elf girl’s grandfather.

Cephalo is the character who is treated the best in all of this, but it’s completely undeserved. Up to this point, he’s been presented as a ruthless but charming rogue, and while he’s threatened Eretria’s life and freedom several times, his threats have been shown to be toothless time and again. This week he goes far beyond threats with Amberle. He actually sexually assaults her, brutally, and is stopped only moments before completing his intended—explicitly so—rape. He also has plenty of dialogue that tells us that this isn’t his first rape; this is habitual behavior for Cephalo, clearly. I might have been able to tolerate this if this attack was finally the thing that gets Cephalo killed, or even if he was left tied up for monsters to get the way he left Wil and the rest of the elven party. That would have been something like narrative justice for a character who has, since the beginning, been pretty irredeemably bad. Cephalo had already been shown to be abusive, misogynistic and a slaver, which is pretty far outside of what can really be classified as “lovable scoundrel” behavior, so knowing that he’s also an actual rapist should seal the deal. Instead, and in lieu of any resolution to this mess that would make sense, Cephalo gets a sort of mini redemption arc before the end of the hour when he’s given the opportunity to save the group when they face the Reaper that gives the episode its title.

So, to recap: Amberle has to be humbled because she’s been so bitchy about this whole quest thing, Eretria is totally willing to abandon another woman to be raped unless she can gain personally from a rescue, and Cephalo is…misunderstood? I guess?

There’s some other stuff that happens this week, but I don’t care much about it since I’m still seething over the Cephalo crap, which basically ruined the whole episode for me. I know that this show has been billed as Game of Thrones for teens, or whatever, but that’s no reason for The Shannara Chronicles to emulate some of GoT’s worst qualities. Part of what I’ve enjoyed about this series so far is that it is so very different from the other, more grimdark shows that are so popular these days. The lighter tone and more straightforward heroic quest adventure story of Shannara has its own sort of appeal, but “Reaper” unravels some of that appeal by making things darker and more convoluted than they need to be.

2 thoughts on “The Shannara Chronicles: “Reaper” is a morass of upsetting writing choices”