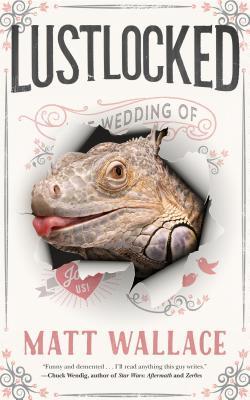 I received a free advance copy of this title from the publisher via NetGalley.

Lustlocked is the second in Matt Wallace’s Sin du Jour series, which began with the riotously funny Envy of Angels late last year. When I read the earlier volume, it was as part of my ongoing project of reading all of Tor.com’s new novellas, but I didn’t expect to like it much. Instead I found it quite enjoyable—smart and fast and a thoroughly fun read. I couldn’t wait for Lustlocked, and I was not disappointed.

It picks up more or less right where Envy of Angels ended, with Lena and Darren still kind of reeling from their experiences during their first days on the job at Sin du Jour and now faced with the decision of whether or not to sign on to the company on a more permanent basis. Of course they do, or there’d be very little story left to tell, and they (and we) quickly learn that there’s never a boring day at this catering outfit. The first job after Lena and Darren sign their contracts is a huge formal wedding for goblin royalty, which quickly gets out of hand when the bride complains that her in-laws aren’t always as nice to her as they could be and resident witch Boosha decides to do something about it.

Where Envy felt a little disjointed and too busy, with the fish-out-of-water story of Lena and Darren seeming almost incidental to the various other, more interesting storylines happening around it, Lustlocked finds a much better balance. There’s still an awful lot going on, including a sort of prologue that still seems somewhat out of place and disconnected from the main plot, which concerns a goblin wedding, but Lustlocked never feels overstuffed the way its predecessor sometimes did. Aside from the prologue, things flow along at a respectable and pleasantly methodical pace.

Where this second installment of the (hopefully open-ended and long-running) series really shines, though, is in continuing to bring to life its world and characters. Every new revelation about the mythology Matt Wallace is creating for this series is a new delight, and between Lustlocked itself and the bonus short story at the end (which was an excellent surprise) there was a ton of character background and development. I loved the sequence where Lena and Darren are being given a tour of the building, where I was glad to meet a couple of new characters. Wallace’s descriptions of food are delectably creative and full of vivid sensory descriptions, while his knowledge of the restaurant/catering/food business is definitely up to the task of making Sin du Jour feel like a real and lived-in place.

My only real criticism of the series so far is that I’m not quite sure what exactly Darren is there for. He didn’t make much of an impression on me in Envy, and he wasn’t much more present in Lustlocked. While Lena is really coming into her own as a character, Darren just kind of… exists. In a series as jam-packed with characters as this one, especially when being told in novella-length pieces, I kind of feel like every character really needs to exist for a specific reason. Lena is his roommate, and even she doesn’t seem to like or think about Darren very much at all, so he sadly ends up feeling superfluous.

In a bittersweet-in-hindsight turn of events, I read Lustlocked the day that David Bowie died, which feels a little like destiny, as it’s heavily implied in the book that David Bowie is/was an actual goblin king. I think this book might always be a little special to me because of that, as it’s a lovely tribute to the man, and one that I especially like because it is such pure, unadulterated fun. Of course David Bowie could be actual goblin royalty—IRL headcanon accepted.