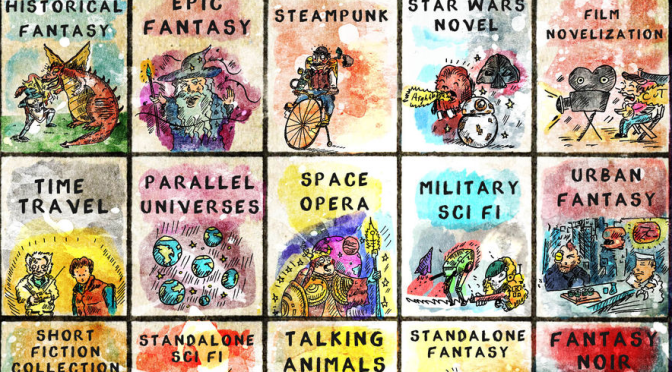 I haven’t done any yearly reading challenge things before because I usually like to just read whatever sounds good when I finish a book, but I think I might use this SFF bingo card from the B&N Sci-Fi and Fantasy Blog this year. There’s a nice variety on here, and I’m always looking for new things to read outside my comfort zone. Plus, it’s so pretty, I can’t wait to print it out so I can hang it up next to my work space.

Speaking of reading habits, it’s definitely become the fashion in the last couple of years for those of us of the feminist persuasion to declare, loudly and publicly, that we’re not reading any books by men, or by white men, or whatever. I’m guilty of this myself, a couple of years ago, and I don’t regret it–it’s actually a great way to shock oneself into reading more diversely–but Jia Tolentino at Jezebel makes a pretty compelling case for why we should all shut up about it already.  I don’t entirely agree, but I do approve of preemptively calling out the inevitable rash of self-congratulatory New Year’s think pieces on the topic.

Fandom Following is a voice of reason in the wilderness, with a good explanation of why we shouldn’t care about Game of Thrones season six passing up the books.

Smart Bitches Trashy Books tells us all about Mary Wollstonecraft.

The Mary Sue tells us all about lesbian vampires.

George Lucas’s ex-wife apparently played a big role in make the first Star Wars trilogy as great as it was. I wish I could say I was surprised by this.

Also at the Mary Sue this week, “John Boyega and the Importance of the Unlikely Hero.”

As previously “unlikely” heroes become more likely and white dude heroes become less likely, racist and sexist white dudes have come out of the woodwork to cry about it. Laurie Penny has some advice for them.

The Root interviewed Nnedi Okorafor on putting Africans at the center of science fiction.

At Fantasy Faction, publishers list their most-anticipated SFF novels of the year.

MCM Buzz gives us 6 new fantasy authors to watch in 2016.

Hodderscape has a sneak peek at A Closed and Common Orbit, Becky Chambers’ follow-up to The Long Way to a Small, Angry Planet, which is one of my most anticipated novels this year. 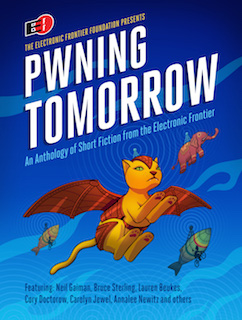 If you’re looking for some cheap/free fiction this week, the Electronic Freedom Foundation just published a speculative fiction anthology, Pwning Tomorrow. You can donate to the EFF and download the anthology here. The rather impressive table of contents includes Cory Doctorow, Charlie Jane Anders, Kameron Hurley, Neil Gaiman, and many more of today’s most popular authors. It’s like they saw Microsoft’s Future Visions and decided to top it. By a lot.