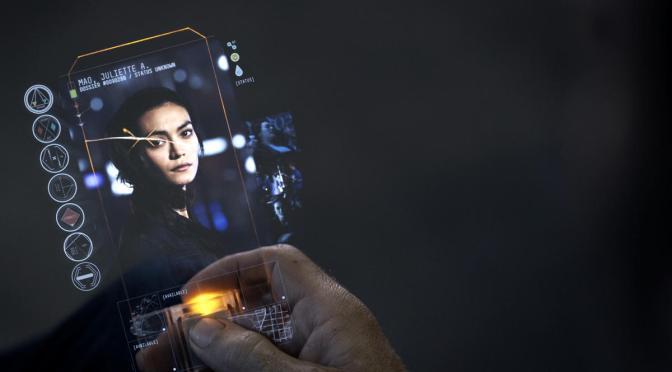 “Dulcinea” covers essentially the first forty pages of Leviathan Wakes, the first novel in the Expanse book series by James S.A. Corey, plus (apparently) some material from the second book. It’s something far more than just a pilot episode, but it definitely has something of the pilot feel about it, with its heavy focus on world building and character introductions. Still, it’s a thoroughly engaging hour of delightfully pulpy sci-fi television and an excellent start to a series that many sci-fi fans (myself included) have high hopes for.

The show seems to be combining three different stories. Detective Miller (Thomas Jane) on Ceres Station is investigating the disappearance of an heiress, Julie Mao (Florence Faivre), who ran off to join an activist movement after college. Jim Holden (Steven Strait) is the unwilling second in command of an ice-hauling spaceship in the asteroid belt. And Chrisjen Avasarala (Shohreh Aghdashloo) is a powerful and rather terrifying politician on Earth.

Most of “Dulcinea” is obviously set-up for the rest of the season’s plot, and very little actually happens in this episode that isn’t exposition. However, the episode ends with the sudden explosion of the ice hauler, which is sure to provide an impetus for plenty more actual action in the second episode. If the rest of the season follows the first book as closely as this episode seems to, we’re in for a hell of a ride.

Of course, what I’m most excited about is Avasarala. Leviathan Wakes is a book that has something of a problem with female characters—rather, a lack of them, and a lot of misuse of the few that it has—enough that I likely won’t continue reading more of the novels. Avasarala is an unusual character, though, and I can’t wait to see what her role is going to be in the show.

If the show was just a straight adaptation of Leviathan Wakes, I probably wouldn’t be watching it, but Avasarala is just fascinating. It’s not uncommon to see shady government types in science fiction, but usually they’re white dudes in suits.

2 thoughts on “The Expanse: “Dulcinea” starts this series off with a bang”