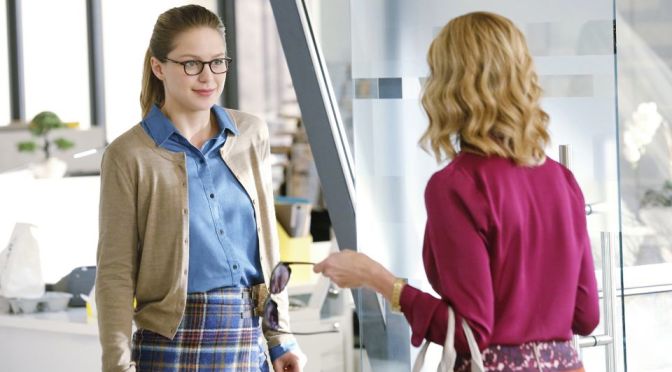 “Hostile Takeover” is really the first half of a two-part episode, and it literally ends in the middle of a fight scene, which makes it hands down the most frustrating winter finale of anything I’m watching this year. Aside from that, it’s a largely run of the mill episode of Supergirl, with most of the shows greatest weaknesses on full display.

I was really looking forward to more Astra stuff, and while this episode did deal with her, it unfortunately felt relegated to B-plot status. Certainly, Kara’s interactions with Astra weren’t nearly as interesting or satisfying as the evolution of Kara’s relationship with Cat Grant. This week’s revelations about Astra suggest a level of moral ambiguity that Supergirl just isn’t well-equipped to handle, and even Melissa Benoist’s excellent performance isn’t enough to keep this all from being a big mess.

The biggest surprise this week is that maybe Astra isn’t quite a villain after all—except she totally is, because this show sucks at exploring grey areas. It turns out that back on Krypton, Astra was something of an eco-terrorist, concerned with ending the environmental degradation that eventually led to the planet’s destruction. Kara’s mother, Alura, captured and imprisoned her sister, and Astra blames Alura for Krypton’s fate. Now that Astra is free, she’s got some similarly nefarious plan to prevent humans from destroying Earth the way Kryptonians wrecked their planet. The problem, of course, is that Astra’s methods are questionable, so she must be stopped, I guess.

The obvious issue with this storyline is that it’s patently ridiculous. I can totally believe that the Kryptonians wrecked their planet—goodness knows, we sure are, and they’re just like us—and the Astra as eco-terrorist stuff isn’t a terrible idea, but the execution of it in this episode is just awful. Poor Kara is supposed to be just absolutely tortured by all these revelations, and there is some crying and stuff, but there’s not any serious examination of any of the issues, so in the end none of this is at all convincing and it’s not even very clear exactly what the crying was about.

The actual B-plot, which deals with a member of CatCo’s board scheming to oust Cat Grant from her own company, fares much better, though it’s also silly. Basically, this dude has managed to hack/leak a whole bunch of Cat’s potentially embarrassing emails. Kara uses her super hearing to find out the plot, and then James, Winn, and Lucy do some corporate espionage to save Cat’s job. That stuff isn’t that important, though, because the real point of all this is to finally let Cat figure out that “Kira” is Supergirl. I love how self-congratulatory Cat is when she’s confronting Kara about her identity; this scene was everything I could have wanted it to be, and I’m very much looking forward to seeing how this changes their relationship going forward.