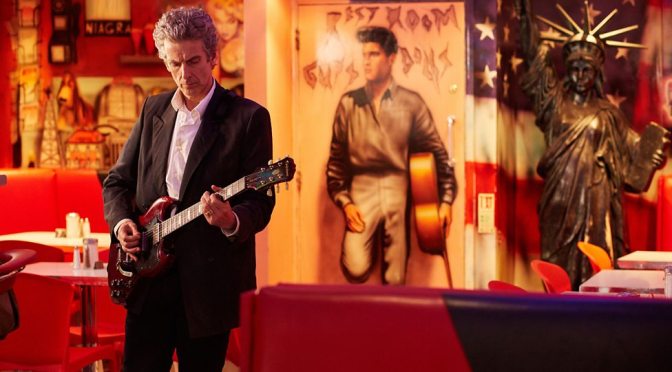 “Hell Bent” is a hell of an episode of a show that I have largely lost faith in over the last few years. My expectations for Doctor Who under the leadership of Steven Moffat have pretty much completely evaporated, and Moffat’s handling of the Doctor’s history, especially as it concerns Gallifrey, has consistently been one of the least interesting-to-me hallmarks of the Moffat era. The previews for this episode showed that Gallifrey was exactly where the Doctor was going in this finale, so my expectations of enjoying it were correspondingly low. I’m happy to have been pleasantly surprised.

Of course, I say “pleasantly surprised,” but the truth is that “Hell Bent” blew all my expectations out of the water. While it doesn’t redeem multiple seasons’ worth of bad writing, poor characterization, whiz-bang endings, and a general trend towards “style” over substance, this episode—especially in conjunction with the previous two—stands out as a stellar accomplishment, the type of truly excellent storytelling that Steven Moffat is, sadly, only all-too-occasionally capable of.

The framing device for the episode is the Doctor in a 1950s style diner in Nevada, telling the story of Clara to…Clara herself. This is the first surprise of the episode, which I had thought would be another no-companion episode that would deal with some kind of epic storyline on Gallifrey. It turns out that is not at all the case. The Gallifrey stuff, honestly, ends up being almost incidental rather than integral to real story, which is an exploration of the Doctor’s unhinged grief over Clara’s death and a way to provide an even better ending for Clara than the quite serviceable one we got in “Enter the Raven.”

That said, it takes until about halfway through the episode before we actually learn what the Doctor is on Gallifrey for. Spending nearly thirty minutes with the Doctor dicking around in a barn, prevaricating about what he knows about the Hybrid, and banishing all his political enemies is a shameless waste of time. Though I suppose this is Moffat’s attempt to establish Gallifrey’s place in the show’s current mythology, it’s a tiresome and senselessly circuitous route to take to the crux of the story: The Doctor is really on Gallifrey to gain access to an extraction chamber that will allow him to remove Clara from time at the moment of her death in order to save her life.

Once the Doctor has safely rescued Clara, we get more of the same speech that she gave before she walked out to meet the raven in the first place, which is a nice bit of emotional continuity while the Doctor steals another Tardis so he can take Clara to the end of the universe. He’s convinced that this journey will give time a chance to heal and set Clara’s heart beating again, which is a weird piece of mysticism, but it gets us to where Ashildr/Me is waiting for the Doctor with some perfectly delivered philosophical advice. This is also where things get really interesting, as the Doctor spills his plans to Me while Clara listens in from inside the Tardis.

In a sometimes incoherent discussion, we learn that it’s possible that the “Hybrid” that is supposed to be so dangerous might actually be the combination of the Doctor and Clara, something the Doctor acknowledges as a possibility. This, you see, is why the Doctor’s big plan is to resurrect Clara only to then remove all her memories of him and then leave her forever, something like what happened to Donna Noble, only even more infuriating because the Doctor’s decision here isn’t motivated by a desire to minimize harm. He’s just being high-handed and, frankly, selfish, which Me reminds him of.

Even better, when the Doctor and Me enter the Tardis, Clara is prepared. She’s used the Doctor’s sonic sunglasses to reverse the effect of the memory erasing device so it will work on the Doctor instead of on her, and she’s adamantly opposed to giving up her past. It’s a scene that finally brings home the idea that Clara really is perhaps too much like the Doctor for anyone’s good, and it’s also the first time since Martha Jones’ departure that a companion has left the Doctor so entirely on her own terms, and it’s really wonderful.

Jenna Coleman really shows her range in this episode as she refuses to have her own life and experiences subordinated to the Doctor’s will, and it doesn’t hurt that the Capaldi’s performance is absolutely superb both in his final scene on the newly stolen Tardis and in the scenes in Clara’s diner that bookend the main storyline. The best moment of the night, though, is a tie between the bittersweet instant when the Doctor insists that he will know Clara if he ever sees her again and Clara realizes that he’s really forgotten her and the moment very shortly after that when we get to see Clara fly off together with Me in the extra absconded-with Tardis.

If the first half of “Hell Bent” is an exercise in self-important grandstanding (it really, really is, on the part of Moffat and the Doctor both), the second half is a well-conceived, beautifully acted, and deeply resonant conclusion to Clara Oswald’s tenure as companion. “Face the Raven” was the best ending it was reasonable to expect for Clara, but “Hell Bent” is the ending that she deserved.