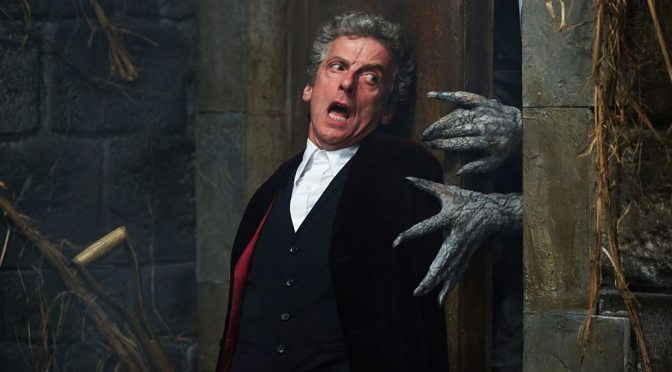 “Heaven Sent” is a near-perfect episode of Doctor Who and a reminder that Steven Moffat isn’t completely and irredeemably awful and a blight on the history of the show, but is in fact a very good writer capable of creating truly compelling television. It’s by far the best episode of Doctor Who in recent years, though perhaps that’s because the Doctor is the only character on the screen for the vast majority of it—something that I would suggest is Steven Moffat’s ideal for the show, judging by the show’s increasing disregard for and neglect of all characters who aren’t the Doctor.

That said, Steven Capaldi has been the show’s strongest asset for some time, and “Heaven Sent” finds him imprisoned in a mysterious castle and pursued by an actually quite frightening, if also mysterious, creature in a voluminous robe. This creature can only be outrun temporarily, though it moves slowly, and the only thing that will stop it (also only temporarily) is the Doctor offering it a truthful confession. Something, something, the Doctor has a mind-palace—I mean mind-TARDIS—where he’s working through his feelings about Clara’s death and figuring out how to “WIN,” and also he has to spend literally billions of years punching through a giant harder-than-diamond wall with his fist. It’s a much better episode than it sounds, though, and Capaldi is at the top of his game here as he explores the castle and talks at Clara inside his head.

The problem that I have with this episode is a problem that is ongoing and omnipresent in Moffat’s work as both a writer and showrunner. While “Heaven Sent” could be read as a great episode that gives the Doctor time to grieve his lost companion, it just never manages to feel really real, and this is entirely due to Steven Moffat’s unwillingness to do the actual work required to actually elicit the emotional responses that he wants the audience to have. Instead, Moffat tells us how he thinks we ought to feel, regardless of whether or not it’s supported by anything that we’ve been shown so far.

The overall effect of this is that, while it’s possible to sort of objectively understand what Moffat is trying to communicate, it’s difficult to actually really get it. It’s unfortunate, particularly in an episode as well-written as this one. If Clara had been utilized more intelligently and developed as a fully-realized character over the past couple of seasons, this episode (and “Enter the Raven,” for that matter) would have been absolutely devastating. As it is, it’s not even enough to bring a tear to the eye.

Steven Moffat is a capable writer and can come up with clever ideas from time to time, but he’s never quite managed to learn that he can’t script the audience’s reactions. The most emotional moments of a Moffat episode always rely on implications, narrative shorthand, and straight up telling the audience what feelings to have. This is as true now as it was all the way back in “Blink” and “Silence in the Library/Forest of the Dead.” I don’t suppose I can reasonably expect this style to change after all this time, but it’s disappointing nonetheless.

“Heaven Sent” could have been perfect, but instead we have to settle for close-but-no-cigar.