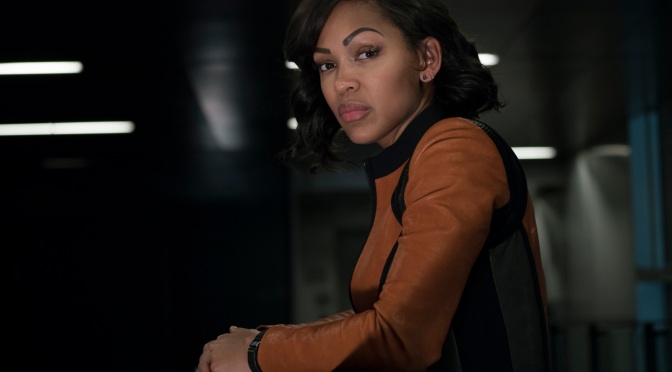 We’re up to what is likely the penultimate episode of Minority Report, and it feels like the show is just now starting to hit a new and more comfortable stride as it’s moved away from the case-of-the-week format that it stuck to earlier in the season. “Memento Mori” delves deeper into the conspiracy our protagonists brushed up against last week as well as the DIA’s plot to re-enslave the precogs. Even more than I did last week, I feel like this is the show that Minority Report should always have been.

The show has always been at its best when it explores its larger themes and elaborates on its overarching plot, and it’s been doing more and more of that as it nears its probable ending. It may be too little, too late to save the show (though it’s still not officially cancelled), and it’s still not entirely living up to the potential of its premise, but it’s been an enjoyable couple of weeks.

The best scene of this week was Dash, Vega, Blake, and Akeela all hanging out together at the beginning of the episode, and I’m terribly sad that this is almost certainly the only time we’ll get to see this happen. It’s nice to see Dash in a somewhat normal environment, and I like seeing the whole team spending time together doing something not murder-related. It’s a chance for us to see the chemistry between Vega and Blake, though it’s also one more reason to be bummed about the impending cancellation of the series. Personally, I’ve always rather liked the idea of Vega and Dash together, but Vega and Blake would have worked, too. I don’t always care for romantic drama in these kinds of shows, but a little more romance would have helped to soften the often unlikeable Vega, especially if the show never intended to do much with her family relationships or her friendship with Akeela.

Dash does have a vision this week, and there is a case, this is all stuff that ties into the bigger intrigues and ideas behind the show. A senator who is working to pass a bill allowing genetic tinkering with fetuses is the target of a politically motivated attack, and it’s tied back to the Memento Mori terrorist group that we were introduced to last week. The ideas introduced in this plot are only tangentially related to the bigger things going on in the show as well as getting a little garbled in their delivery, but it mostly works even if viruses don’t work at all the way the show’s writers seem to think they do.

The most important things that are happening in this episode concern the DIA and Blomfield’s plan to recapture and use the precogs. Early in the episode, Arthur tries to get Blake to blackmail someone in the DIA in order to put an end to Blomfield’s machinations, but Blake refuses in no uncertain terms. When Arthur gets someone else to do his dirty work, Blomfield turns to the private sector to keep his plans moving forward. When Blomfield turns up at Wally’s place looking for the precogs, we finally get to see Blomfield becoming a truly terrifying villain. Wally manages to be momentarily successful at getting Blomfield and his thugs to leave him alone, but Blomfield is already pretty successful at finding the precogs without Wally’s assistance.

Before the end of the episode, Blomfield has managed to locate Agatha, who goes to Arthur after being flushed from her hiding place on Libertarian Island (or whatever). Agatha is still having the vision of Vega standing over them in the milk bath, and now her vision shows Vega ordering some unseen person to “put them in.” This ominous revelation caps off the episode, and we’re all set up for next week’s finale.