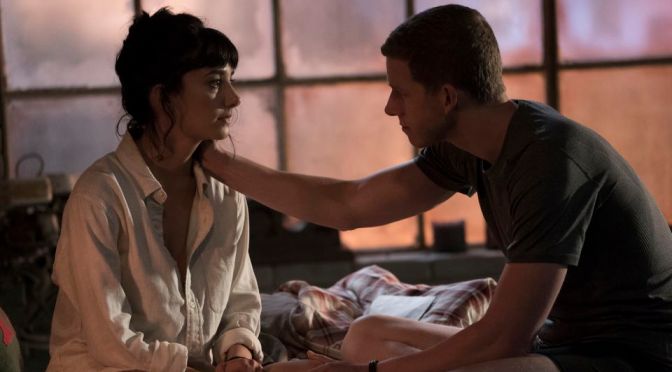 To be fair, the character development in “Fredi” was both much-needed and refreshing after three weeks of heavily plot-focused story-telling. However, as nice as it was to learn a little more about Akeela and see Dash get a bit more to do, it wasn’t enough to carry an episode with such a hackneyed (albeit technically well-executed) case of the week.

The biggest problem I have with Minority Report at this point, though, is that I don’t think the writers really know how to embrace the aspects of the show’s concept and source material that could really set it apart from the pack of similar procedural programs. The pilot episode was a promising mess, with too many, too-conflicting ideas, but it also had a distinctness and specificity that has been largely missing in subsequent episodes. Most significantly, the major problem and moral conflict that was introduced in the pilot–essentially, how to deal with damage caused by pre-crime–seems to have been entirely abandoned, and it hasn’t really been replaced with any similarly weighty conflict.

“Fredi” opens with the official commencement of the Hawk-Eye program as the civilian analysts graduate their training and move on to working with their assigned officers. Right at the end of this opening scene, Dash has his vision of the week, helpfully warned about it by the device Wally gave him last week.  This vision is even less helpful than useful, but the mystery this week gives Dash some good opportunities to show off what he’s capable of doing on his own as he goes “undercover” to date the woman, Fredi, that he thinks is going to be murdered.

This is actually a tough story to squeeze into one episode. It’s not that there’s a lot that happens; on the contrary, there are relatively few events going on in “Fredi.” It’s just that the emotional arc of the episode, with Dash’s romance with Fredi, the revelation of Fredi’s search for the truth about her sister’s death, and the final “twist” ending, feels so rushed that it becomes unbelievable. I liked seeing this side of Dash explored, and it’s good to know that he’s not as helpless socially as he’s seemed the last few weeks, but I’ve never been a fan of these sorts of whirlwind fictional romances. It’s the right emotional trajectory, but it happens so quickly that the impact of it all is too diminished to be truly effective.

Still, there were some parts of the episode that worked.

I was thrilled to see Akeela get a little more screen time. I liked her meeting with Wally, and I thought her scenes with Vega worked well. I’m starting to feel like these two women are actually friends, and I hope we get to see some more of them doing things together in the future, hopefully a little less focused on Dash-voyeurism.

Another pairing that I liked? Dash and Arthur. Arthur’s willingness to drop whatever he is doing in order to be available for his brother is actually a sort of fascinating piece of characterization. It shows that Dash isn’t the only one with some issues with codependency, but it also shows just how deep their bond really goes. Dash’s reliance on Arthur for assistance can be a little tiresome, and I’d like to see Arthur’s area of expertise be a little more specifically defined and limited, but I will forgive it this week because I thought the eyeball printer was awesome even though I’m not sure how Arthur knows that guy.

Finally, Agatha might be the most interesting character on the show, and the mystery of exactly what she’s up to is genuinely intriguing. She sent Charlie to get her a schematic for the milk bath that she and the twins were kept in during pre-crime, and I honestly have no idea what she might need that for–which is a feeling I love having about shows. This secondary plot could stand to be a little more tonally connected to everything else, but it’s the last vestige of some of the big ideas that were introduced in the pilot.

Mostly, “Fredi” is notable as the first episode of the show that felt more like a straightforward procedural.

When I watched the pilot, the thing that I found most interesting was that question of what to do with the survivors of the pre-crime system, both precognitives and pre-criminals; the contrast between those two experiences; and the ethical and moral questions presented by Dash’s return to law enforcement. The pilot was, as I said, a mess, but I had high hopes that this could be a smart, timely show to address some important topics. Even the shift in the last couple of episodes to a less substantive case of the week format didn’t faze me because the institution of the Hawk-Eye program was on the horizon, and that should present a ton of ethically grey material to explore. Then we get “Fredi,” which basically ignores Hawk-Eye altogether after the first few minutes, as if the whole Hawk-Eye thing was just a way to give Dash and Vega a cover for working together. It’s disheartening that the first case they work on after getting the official go-ahead is one that isn’t related to Hawk-Eye at all.

Fox has already cut their series order for this show from thirteen episodes to ten, and while this is a normal pattern for the network, I’m having a hard time seeing why they should keep this show around longer than that. I’m probably going to give it a couple more weeks at least because I’m still enjoying it, but it’s sad to see what I think could have been a winning premise and excellent source material being squandered like this. Minority Report could have been something really special if it had embraced the cerebral concepts it originally introduced, but instead it’s spent the last three weeks distancing itself as far as possible from them.