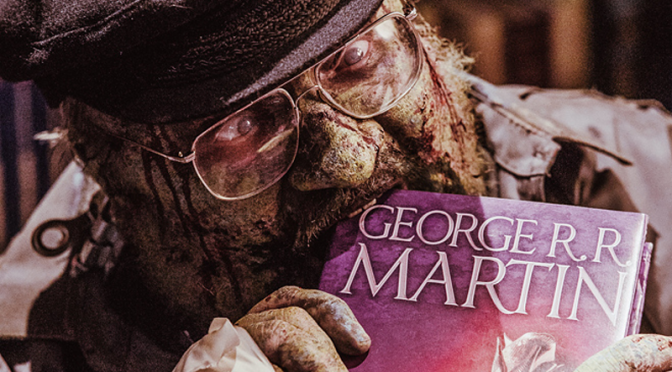 “Not even the zombie apocalypse can stop George R.R. Martin from releasing books.”

New tumblr nihilisa-frank is my favorite new thing this week.

Another study has found that women and men make up basically equal portions of the gaming community. Also that women play mostly the same games men play. Unsurprisingly, this will never convince the hordes of sad man children who believe, possibly because they and their friends are so repulsive to women that we don’t hang out with them, that women don’t play games.

Today, in things I want: Star Trek printed EVERYTHING.

Speaking of Star Trek, it’s been around for 49 years as of September 8! The Barnes & Noble Sci-Fi and Fantasy blog has a list of 12 books to read if you’re in the mind to celebrate.

Black Girls are Magic Lit Mag is a new literary magazine that will be focused on stories of the SFF persuasion by and about black girls. They will be accepting submissions starting Sept. 14.

At Feministe, a follow up to a question asked at a Dragon Con panel: on female heroes and feminity.

The Toast discusses the problem with Trillian in Douglas Adams’ Hitchhiker’s Guide books. My favorite part, which happens to be totally accurate:

Trillian has never been able to escape being buffeted by conventions and expectations. When she’s good, she’s either a spoof on the “token girl” or a by-the-numbers Strong Female Character. When she’s bad, she’s a security hole – a way for lazy, shitty tropes about women to hitch a ride, Ford Prefect-style, on a series that otherwise bucks cliché.

And because this Hugo Awards stuff is just never going to die: