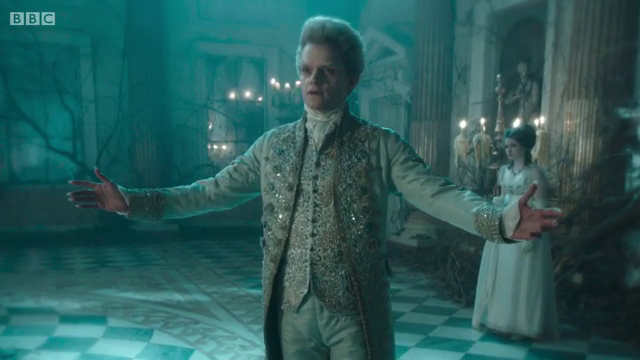 Compared the the first four episodes of Jonathan Strange & Mr. Norrell, not a lot happens in this episode. Instead, “Arabella” is a slower-paced hour focused on character development and feelings. Overall, I think it’s a strong episode, but there were a couple of odd adaptational decisions that I’m not thrilled with.

The episode begins with Jonathan Strange at the Battle of Waterloo, which doesn’t feel anywhere near as epic as it did in the book. We see nothing of Brussels. Instead the action takes place in an almost comically tiny fort surrounded by a veritable sea of CGI army guys, although most of the actual action in the wide shots is obscured by an enormous cloud of smoke and the whole battle is over in just a couple of minutes.

During the battle, Jonathan Strange magicks some water out of a well to put out a fire, whips up some vines to keep some guys from climbing the walls of the fort, and almost gets blown up. In a moment of desperation, Strange uses his magic to make a huge mud hand and squishes a guy that was about to kill him–very clearly violating his own earlier statement that a gentleman would never kill anyone with magic. It ought to be a huge deal, but everything happens so quickly that I didn’t really feel the weight of this moment. Even the wide shot of the devastated battleground and a long look at the melancholy faces of Wellington, Strange, and Grant as they observe it just feels off–probably because Wellington ruins the gravitas of the moment by wondering aloud what will be done with them now. I suppose this could be read as ironic, but I just didn’t like it. It would have been better to just stick with the three men silently looking at the horrors of war.

When Jonathan Strange returns to England, he goes back to residing at his country house, Ashfair in Shropshire. He’s obviously quite changed by his experiences in the war–his hands shake, and he’s got a touch of gray in his hair–but he seems focused on rebuilding his life with Arabella and writing his book. I like these quiet domestic scenes, and I love that Arabella is the illustrator of her husband’s book, but I feel like everything goes a little too quickly back to something a little too close to normal after Jonathan’s trauma at Waterloo. Mostly, while I think the gray in his hair and the tremble in his hands are nice, subtle ways of showing the change in him, Jonathan’s final decision to use magic to kill is not really commented on in any specific way, but ends up sort of smushed together with the whole war experience.

Back in London (introduced in this episode with the above shot), Mr. Norrell is denouncing Jonathan Strange to anyone who will listen and frantically trying to find a way to prevent the publication of Strange’s book. I was happy to see the show include the publisher, Murray, who practically laughs Norrell out of the room when Norrell and Lascelles try to bully him.

While the moss oak Arabella we saw at the end of the last episode wanders the countryside freaking out honest folk, Lady Pole dreams that Arabella will be taken by the Gentleman and tries rather unsuccessfully to communicate her fears to Segundus and Honeyfoot. Lady Pole beseeches them to send a message to Jonathan Strange, but it is too late. Stephen Black comes in the night and spirits Arabella away to Lost-Hope.

This decision to have Stephen be the one who actually, physically kidnaps Arabella is one that I just can’t get on board with because it seems so out of character. We’ve seen Stephen hanging around with the Gentleman quite a bit, but he always seems reluctant at best and more often revolted by the fairy. We’ve even gotten to see Stephen Black’s subtle resistance of the Gentleman, even though Stephen becomes increasingly hopeless and despondent as things continue on. Even in this episode, there are times when Stephen refuses to do the Gentleman’s bidding while they are in the same room together, so it doesn’t make sense that Stephen would kidnap Arabella on his own, without any evidence of his being compelled to do so and with such evident guilt and shame about doing it.

One thing I like about the way that Arabella’s enchantment is handled is that it’s made very clear exactly how Jonathan Strange is tricked into renouncing his wife. I’ve never felt that this was particularly well done in the book, but in the show it’s pretty unambiguous. However, then the show turns right around and does another thing I don’t like: has Arabella enchanted in such a way that she doesn’t remember her life before Lost-Hope at all.

In the book, Arabella and Lady Pole are both very aware of what has happened to them, and while this doesn’t exactly give them any agency or control over their stories, it does give them distinct personalities. Lady Pole simmers with fury and frustration. She resents Mr. Norrell for his abuse of her and she has no good opinion of Jonathan Strange for what she sees as his neglect of his wife. Arabella, on the other hand, is trapped entirely in faerie instead of dealing with the stress of living in two worlds like her friend. Where Lady Pole has no faith in the magicians’ ability (or desire) to rescue either of them, Arabella holds onto hope that her husband will come for her.

I actually really hate that we are losing this dynamic in the show. After all the show has done to treat these two women fairly in the narrative, even expanding upon Lady Pole’s role quite a bit, it’s deeply disappointing that they’ve sort of senselessly cut out this part of their relationship. If nothing else, it kind of cruelly deprives Lady Pole of the comfort of her friend, and for no real reason.

At Ashfair, Jonathan Strange doesn’t notice that Arabella is gone until a neighbor arrives to tell him that she’s been seen wandering the countryside again. When it’s discovered that she’s not in the house, Strange first attempts to use magic to locate her but is confused when his scrying says that she’s not in England, Scotland, or Wales. Strange and a search party go out to look for her, and they soon find moss oak Arabella and return her to the house. After extracting Jonathan’s assurances that she is his only wife, moss oak Arabella dies in the night.

When Jonathan Strange wakes up to find what he thinks is his wife’s (rather gruesome-looking) corpse, I think it’s fair to say that he loses it. By the time his brother-in-law, Henry Woodhope, arrives, Strange is well into searching through what books he has looking for a clue for how to return Arabella to life. In desperation, Strange even writes to his old tutor begging for help, offering to give up magic entirely if only Mr. Norrell will tell him how he brought back Lady Pole.

In London, Mr. Norrell has still been trying to figure out how to prevent the publication of Jonathan Strange’s book, but for some reason he barely entertains the idea of helping Strange–even with Strange offering not to publish. We see in these London scenes just how much Norrell is under Lascelles’ thumb, and we also see some of the stress that this puts on Norrell’s relationship with Childermass. In the end, Norrell never even replies to Strange’s letters.

A full week after Arabella’s death, Jonathan Strange is finally forced to admit defeat. Even the spell he used to reanimate the Neapolitans has no effect, and Norrell’s silence leaves him with no hope of help from that quarter. In perhaps the most moving scene of the show so far, Henry Woodhope finally convinces Jonathan that they must let Arabella go, and she is finally buried in a familiar, snow-covered graveyard.

Meanwhile, at Starecross, Honeyfoot and Segundus are perhaps making a breakthrough with Lady Pole’s treatment. Honeyfoot recognizes some of the stories Lady Pole tells because they are similar to fairy tales that his mother collected when he was a child, only Lady Pole’s stories are from the fairies’ point of view. While Stephen Black is skeptical of the magicians’ methods, Lady Pole is insistent that they do what they can to make it possible for her to communicate what she’s been trying to for years. Unfortunately, just as they seem to be making some headway in understanding her, they are distracted by someone dropping Vinculus off at the madhouse.

After Arabella’s funeral, Jonathan Strange returns to London to finish his book. He meets with Sir Walter, who warns Strange of the danger of writing too favorably about the Raven King. After telling Strange that “we do not require English magic to be restored any more than it already has been,” Sir Walter promptly reports to Norrell on his conversation with Strange.

Next, Childermass is sent to speak with Strange. Spotting Childermass hiding in some shadows, Jonathan Strange greets the other man warmly and invites Childermass back to his house to discuss the book and to see the illustrations Arabella produced. When Childermass expresses some dissatisfaction with Norrell, Strange asks if it’s not time that he left Norrell and joined him, but Childermass refuses. He’s not done with Norrell yet, but he is willing to promise Strange that there will always be two magicians and two opinions on magic in England. Things take a quick turn, though, when Childermass tells Strange how desperate Norrell is to prevent the publication of Strange’s book. On hearing that Norrell would do “anything” to keep him from publishing, Strange flies into a rage and steps through a mirror before Childermass can stop him.

Jonathan Strange tumbles out of a mirror at Mr. Norrell’s house only to be met by Lascelles, who insists that Norrell is not home. Norrell does come downstairs, but he refuses to speak and Jonathan really only gets a glimpse of the other magician before Lascelles and the footmen wrestle him out of the house. Out in the street, Strange continues to rant until he’s arrested for breaking and entering and tossed into jail. His friend Grant comes to have him released, but before Grant gets the door unlocked, Strange has disappeared into a reflective puddle on the floor.

It’s a great ending to a well-constructed episode. While I have some complaints about it, I think the show has so far been very true to the source material, in spirit if not in every particular detail.