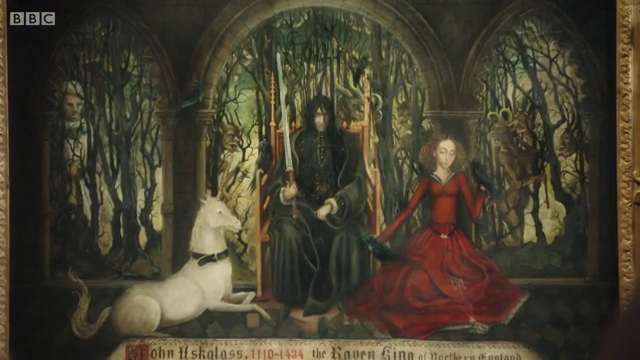 The episode begins right where last week’s ended: with the chaos following Lady Pole’s attempt on Mr. Norrell’s life. We quickly learn that Lady Pole succeeded only in wounding Childermass and earning herself a trip to an asylum.

The standout part of this whole sort of opening sequence is the interaction between Childermass and Norrell. It’s probably the longest we’ve gotten to see these two characters alone together so far in the show, and I think it’s been worth the wait. This scene finally manages to really establish the sort of relationship that exists between Mr. Norrell and his servant. Mostly, it’s a weird relationship, characterized by Childermass’s self-assurance and Norrell’s awkward reliance on Childermass. Indeed, while Childermass is incapacitated, Norrell is seemingly barely able to function. At the same time, though, Norrell is suspicious of Childermass’s use of magic, and Childermass has begun to mistrust Norrell as well.

Meanwhile, the Stranges seem to be in somewhat better accord now that Jonathan Strange has returned from the Peninsula. As Jonathan prepares to return to his apprenticeship with Mr. Norrell, he and Arabella are extremely cute together.

The first thing that Norrell and Strange do now that they’re back together is visit King George III, who is in the midst of his final bout of madness. They’ve been called to see the king by his children, who hope that they might be able to use magic in some way to help him. Norrell, of course, has already said that magic cannot cure madness, but Strange is more hopeful and even returns on his own after Norrell has already moved along from the matter. While Strange is unsuccessful in penetrating the king’s madness, he does get to see the king disappear into a mirror after having an odd conversation with someone Jonathan can’t see.

When Jonathan goes to Mr. Norrell to talk about what happened, Norrell is dismissive. Norrell is much more interested in promoting his own ideas, primarily through Lascelles’ book, which is nearly ready for publication. Strange is basically shut down entirely, and it’s becoming clear to everyone that Norrell intends to be the only magician in England whose opinions matter. Frustrated with Norrell, Strange takes his leave, returning to his home, where Arabella reminds him of the first spell he ever did–which warned him that Norrell was his enemy.

Lady Pole has been taken to Starecross, which Segundus and Honeyfoot have turned into an asylum since Childermass told them they couldn’t have a magicians’ school. Lady Pole will be their first patient, but she’s terribly unhappy about it. When she recognizes them as magicians, she’s convinced that they are Norrell’s men, only calming down when she observes them refusing Childermass entry to see her. It seems that Starecross may be a comfortable place for Lady Pole after all, and Segundus is even able to see the enchantment that has been placed upon her and Stephen Black, although he doesn’t know what it is.

Earlier in the episode, Arabella questioned her husband about a Miss Grey, who claimed to be learning magic from him, and Jonathan disclaimed any knowledge of the girl. While Jonathan is at a club with a couple of friends, however, he comes face to face with a pair of men who also claim to be his pupils. Clearly, someone is running a scam. When called upon to demonstrate his magic and prove his identity, Strange steps into a mirror, where he finds himself on the [Raven] King’s Roads.

Jonathan Strange uses the roads to travel to where Drawlight is; unsurprisingly, Drawlight is in the middle of duping yet another person out of exorbitant amounts of money, and Strange speedily puts a stop to the scheme. When Strange finally returns to his own house, Arabella has been worried, and she turns furious when Jonathan is dismissive of her concerns. I am pleased that the show follows the book in presenting Jonathan Strange’s inconsiderate behavior toward his wife as a fault, and they do a wonderful job here of showing this conflict between the Stranges in a way that is fair to both characters. Bertie Carvel is affable enough as Jonathan Strange that he’s lovable in spite of his sometimes glaring faults, and Charlotte Riley as Arabella captures such a perfect mix of loving concern and absolutely justified anger that there’s no reasonable way anyone could think her shrewish or nagging. Indeed, I think the viewer is supposed to be almost entirely on her side in this argument, and her feelings are treated entirely seriously.

Drawlight finds himself permanently exiled from Norrell’s presence and in a great deal of debt that is about to get him tossed into prison. However, this might be considered lucky, as Norrell is pushing to have some ancient magical court revived in order that Drawlight could actually be hanged–with the added benefit that such a court could be used to squash any opinions on magic that differ from Norrell’s. Fortunately, Sir Walter is there to, quite sensibly, put a stop to that idea, and he gets one of my favorite speeches so far in the show. This is also, I think, a really clever way of including material from the book without really including it. In the novel, there’s a whole thing where Norrell pesters Parliament for a while about reviving the Cinque Dragownes, and it would have been terribly boring to put that in the miniseries even though it’s a pretty important bit of Norrell’s characterization. This conversation, though, allows us to get that characterization in one short scene, communicating the concept from the book in a smart way. Also, it’s very funny.

Angry about Drawlight and upset that he won’t have his own personal court of law, Norrell turns to picking on Jonathan Strange, next, berating him for his injudicious use of magic. Strange argues, trying to get Norrell excited about the King’s Roads, but Norrell only insists that modern magic must be kept “respectable.” As Strange leaves in frustration again, he grabs a copy of Lascelles’ finished book, which he sets out to review when he gets home.

I am a little bummed that we don’t get the whole text of Strange’s scathing review, but I suppose that gives people a good reason to read the book after watching the miniseries. I did like seeing Lascelles rant about the review to Norrell, though.

Probably the most important thing that happens in this episode is the inevitable breakup between Jonathan Strange and Mr. Norrell. Following the publication of the infamous book review, Strange goes to visit his mentor and inform him of the end of their association. This scene is shot so perfectly and acted so sensitively that it actually made me a little teary. Norrell practically begs Strange not to leave him, and it broke my heart a little.

I would have been happy if the episode had ended here, but there are still a couple of things to be wrapped up. In the last few minutes, we get to see Lady Pole finally settled at Starecross, which is nice, although I think I would rather have seen this finished earlier in the episode. Mostly, I feel this way because Lady Pole’s fleeting contentment is immediately overshadowed by a sort of triple cliffhanger ending.

First, Jonathan Strange is called back to war when Napoleon escapes and starts causing trouble on the continent again. This throws a wrench in the Stranges’ plans to return to their country home, where Jonathan intended to retire and become a theoretical magician.

Finally, the episode ends with Lascelles confronting Norrell about the breakup with Jonathan Strange. Apparently, they had a whole plan of how Norrell was going to browbeat Strange into retracting his book review and stuff, but Norrell didn’t do any of that stuff. However, Norrell is receptive as Lascelles encourages him to work against Jonathan Strange, and by the last ominous shot of the episode, Norrell is vowing to destroy his erstwhile pupil.

“All the Mirrors of the World” is the best episode of the show so far. It’s thematically consistent with its examination of how different pairs of characters balance each other, and it does a masterful job of breaking up the central pair of Strange and Norrell, who don’t know yet just how much they need each other.

As an adaptation, this episode probably hews closer to the source material than any episode yet. Though notable cuts have been made and we miss out on some of the book’s insights into the interior lives of the characters, this episode covers an enormous amount of story in a way that feels naturalistic and almost effortless. The shifts between story lines are smartly done and keep things interesting the whole time without being disorienting or confusing.

Overall, this was just a superb piece of television, and it’s exactly the sort of thing I hoped to see when I first heard this miniseries was in the works. I’m not sure how the whole series will stand up to the source material, but this episode at least definitely does it justice.