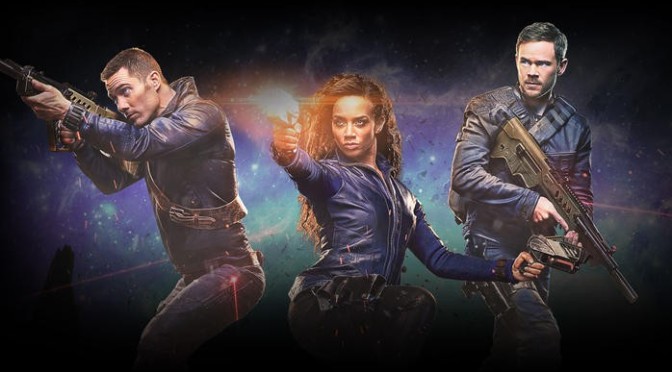 I’m nuts for original space operas these days, with recent movies like Jupiter Ascending and recent books like The Long Way to a Small, Angry Planet to whet my appetite, so giving this show a chance was a no brainer for me. The deal was sealed when I saw it compared favorably to Firefly over at io9. Fortunately, I wasn’t disappointed when I sat down to watch the premiere episode, “Bangarang.”

I can see right off why this show will be heavily compared to Firefly. The Quad is a multiplanet system controlled by an oppressive centralized government (the Company). Nevertheless, there seems to be a little bit of wild west atmosphere going on, where outside of the Company’s direct oversight there are black markets and other illicit goings on. Probably the most notable similarity to Firefly however is the vision of a future cultural fusion between East and West.

The bad news about this is that it feels a little derivative, although for Firefly fans (myself included) it might also be pleasantly familiar. The good news, however, is that whoever is making the decisions on Killjoys has taken notes on the criticisms of Firefly over the years, and the world of Killjoys looks, so far at least, a lot more diverse than Firefly ever managed to be. To be fair, that isn’t saying much, and a glance through the entry for the show at IMDb still shows a pretty white cast, but it’s definitely a step up and in the right direction.

“Bangarang” is a fast-paced episode that didn’t feel very long considering the amount of worldbuilding going on. While there were a couple very obvious straight out infodumps to the audience, I think they handled them as well as is possible to do, and I’m happy to have that out of the way. The story of the episode is fairly simple; it gets our main trio of characters (Dutch, John, and D’Avin) together, and it sets up basically three mysteries that I expect to define the rest of the season:

Honestly, though, this is pretty standard stuff, and there’s not really anything groundbreaking here.

It’s nice to see a woman of color (Hannah John-Kamen) taking the lead in a sci-fi show, and I think I am going to really like her character, but I found it off-putting to see a rape threat in the first two minutes of the show and she’s of course sharing the spotlight with a pair of square-jawed white dudes. Also, I kind of hate the “She Can Still Kick Ass in a Dress” trope, which was on full display in this episode, complete with an absolutely absurd camera focus on her sashaying into battle in a ridiculously sexy manner.

Just in general, I felt like the cast just didn’t quite gel properly in this episode, but I think this is largely because the episode was so heavily focused on worldbuilding and setting up the story. All in all, I enjoyed the premiere, and I’m looking forward to see how things go once they get a bit more into the meat of things.