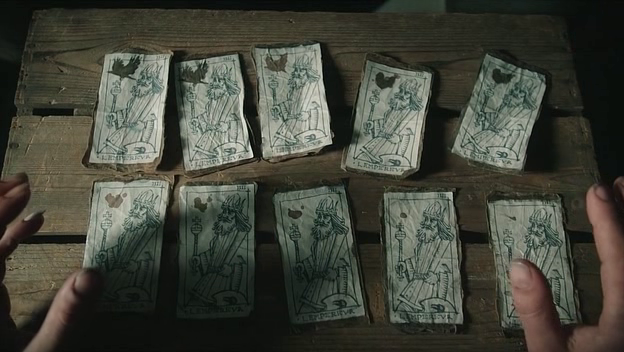 “The Friends of English Magic” covers a good deal of the first third of its source material, but it still feels as if things are starting off pretty slow. This is reflective of the style of the book, which starts slowly as well and builds up into a dramatic juggernaut over time, and I’m not sure if anything could have been done differently and remained a faithful adaptation. Still, it might have been nice to have a little more excitement.

The episode opens with John Segundus and the question that he puts to the York Society of Magicians and later to Mr. Norrell:

Why is there no more magic done in England?

I’m happy to see this being translated to the screen so exactly, but I felt like the introduction of Mr. Norrell, in particular, was rushed, and the delivery of Norrell’s statement that he, himself, is a quite tolerable practical magician just didn’t quite work for me. Eddie Marsan looks the part, but his performance, at least in this crucially important scene, is unpleasantly affected-seeming.

Enzo Cilenti as Childermass is a little better. Although I imagined Childermass taller and darker, my main complaint about Cilenti’s portrayal is that he mumbles his lines to a degree that he’s nearly unintelligible. Edward Hogg as Segundus is a little too reminiscent of Sleepy Hollow-era Johnny Depp, but I find the sort of nervous energy he brings to the role endearing rather than otherwise.

I didn’t love the exterior shot of Hurtfew Abbey. It seemed run-down when I think they were going for gloomy, and I don’t really think either of those things are quite right for the magician’s house. Inside, I think they nailed the weirdness of Norrell’s labyrinth, but the library was a bit too medieval-looking. when I would have expected it to be a little more comfortable. The windows and light were nice, but just, in general, I find everything to be a little too grey and brown, which is too bad because I think grey and brown and dull is sort of the aesthetic the show is going for.

Norrell’s feat of magic at York Minster was similarly rushed feeling, almost frantic-seeming, and visually disappointing, again mostly because everything sort of congeals into a monochromatic grey dullness that sucks the life out of every scene.

Even Norrell’s arrival in London only shifts tone from grey to beige; it’s less gloomy but not much more visually interesting. Even Drawlight (a poorly cast, too old, and obnoxiously lisping Vincent Franklin) is sadly muted in a muddy pepto-bismol pink. John Heffernan as Lascelles, on the other hand, is a perfectly bored and jaded almost-aristocrat, and is one of the few casting choices that I wholeheartedly approve of.

Since everything concerning Norrell is so shrouded in gloom, I would have expected Jonathan Strange’s scenes to be a little more bright and colorful, but that’s hardly the case. However, the casting of Jonathan Strange, Arabella, and Henry is on point. Charlotte Riley, in particular is everything I could have hoped for in Arabella, and her expressive face is put to good use in these early scenes. Bertie Carvel’s Jonathan Strange is perhaps a tad too ingenuous, especially since he’s a good deal older here than Strange is when he’s introduced in the book, but he’s likable and not too handsome for the role.

I was very happy to see Jonathan Strange’s father included, although I suppose the time could have been better spent on other material. There were several scenes that I though could have used just an extra thirty or sixty seconds, and the elder Strange just isn’t that important in the grand scheme of things. As a reader who loved all parts of the book, I’m glad this made the cut, but I can definitely think of more than one better use of that time.

Possibly the greatest disappointment of this first episode is how quickly they fly through everything concerning Vinculus (Paul Kaye, perfectly cast). There’s no particular scene that has been cut from the source material, and all of the most important events happen in the show just as they did in the book, but every scene with Vinculus is one that could have run just a little longer to better effect. In particular, I would have liked to see the part with Childermass, Vinculus, and the cards of Marseilles taken a lot more slowly, and I think Vinculus’s prophecy to Norrell in the alley could have just been enunciated a little better. I’ve watched it twice now, and both times it came across garbled.

On the bright side, Vinculus’s meeting with Jonathan Strange was done nicely. Again, with the mumbling of lines, when I feel like important prophecies should be pronounced more clearly, but overall well-done. This is followed up with Jonathan’s revelation to Arabella and Henry that he plans to study magic, and this scene is one that probably couldn’t have been done better. It bothers me a little that the “enemy” is so clearly recognizable as Norrell, here, but I don’t know how it could have been done differently. When reading the book, this is one of those things that is obvious to the reader but not to the character, and by the time Strange and Norrell meet in the book it’s nearly forgotten because it’s been over a year of book-time. I just have a feeling that it’s going to have to be dealt with differently in the show to avoid making the Stranges seem stupid, and I’m not sure how I feel about that.

The episode ends right where it ought to: with Mr. Norrell’s resurrection of Miss Wintertowne (later, Lady Pole) and the introduction of the gentleman with the thistledown hair. I didn’t love this. In fact, I feel let down by it.

First, let me say that I actually love Alice Englert as Lady Pole. When I heard that the girl from Beautiful Creatures (which was a turd of a film based upon a book that I found unreadably bad) was playing one of my favorite characters, I was definitely apprehensive, but I think she’s going to be okay.

Second, I have to admit that I find myself liking Marc Warren’s Gentleman in spite of myself. I would have preferred a younger actor for the role, but I think he will work after all, once I adjust my expectations.

What I feel let down by, though, is the sheer level of gloom that seems to settle over everything. Like Drawlight’s puke pink suit, the Gentleman’s rather moldy-looking green ends up looking grimy rather than atmospheric, and the leafy cutouts around the edges of it are just a bit too heavy-handed a sign of him being a fairy. It’s certainly not magical, and I would have expected this scene, at least, to have something otherworldly about it. It’s not terrible, I suppose, but I find the sort of ever present pall over ever bit of the show to be a little depressing in a way that the book never was. While the show isn’t devoid of humor, I would like to see it being a little more fun. I think the worst thing that could happen would be for it to take itself too seriously.