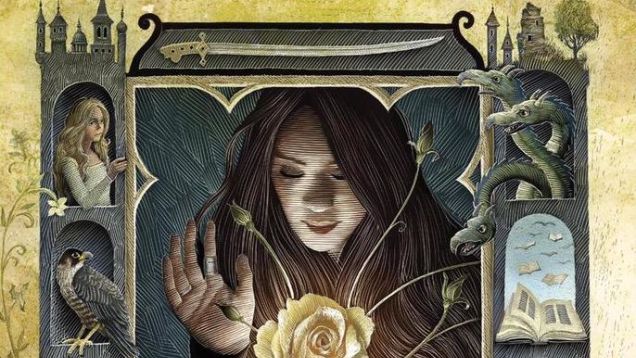 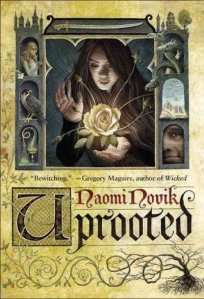 Uprooted is probably my favorite book that I’ve read so far this year, and it’s definitely the best thing I’ve ever read by Naomi Novik. I did rather like His Majesty’s Dragon, but I never kept up on the series. This book is nothing like the Temeraire books, though.

Reading Uprooted is a truly magical experience, and I tore through it in less than a day. Although I generally am not a huge fan of first person narration, I fell in love with Agnieszka immediately. She’s a character with a very strong personality that shines out from every page, and her voice only gets stronger and more certain as she grows throughout the novel.

Her love interest, the Dragon, is a little less three-dimensional, but I think he works. While I don’t usually like large age gaps in my romance and teacher-student romances are even worse, Novik neatly side-steps about 95% of any weirdness by making Agnieszka extremely self-sufficient. The Dragon doesn’t really have that much to teach her; the things Agnieszka needs to learn can’t be taught much at all. Instead, she and the Dragon become friends and partners, and I felt like their relationship grew so organically that by the time the actually consummate it (in a scene that manages to be sexy and fun without being a distraction from the plot) it feels perfectly timed.

The supporting characters are mostly good as well. Perhaps the most important relationship in the book is the one between Agnieszka and her best friend, Kasia, and I love that it’s not always easy. Novik isn’t afraid to look at the darker side of their long friendship and explore negative emotions like jealousy and resentment in an honest and positive way. I liked the Falcon, who is one of the best sort of mostly-static characters–he is who he is, and there’s not much that is going to change him drastically. The book could stand to be more diverse, but the one notable character of color is a black woman who is a badass wizard and gets her own sort of happy ending.

The plot is something else. I read quite a lot of retold fairy tales, and I rather expected Uprooted to be in that vein. Instead, it’s something very different and fresh, and there were several times when I thought I was reading one kind of book only to turn the page and find out that it was something different. While Uprooted is inspired by Polish folk stories, which gives it a certain feeling of familiarity, it’s a wholly original work that pays homage to fairy tales but avoids all the worst fairy tale tropes. In fact, Uprooted plays with fairy tale conventions in some really interesting ways that I definitely see putting it at the top of my year’s best list.