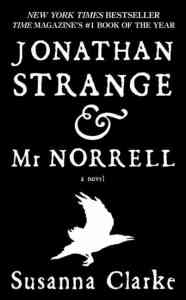 With the war now over, Strange and Norrell aren’t quite sure what to do with themselves. Strange’s experiences on the continent and his long absence have both made it somewhat difficult to just slip back into their old student-teacher relationship.

A Bad Place for Kings

Fortunately, the two magicians aren’t left to their own devices for long. King George is in the midst of a period of madness, and several of his children ask the magicians to see if there is anything they can do to help the king. While Norrell dismisses the idea, Jonathan Strange is at least willing to meet the man and see if any ideas come to him.

The first challenge Strange has to overcome is just getting to the king in the first place. King George is being kept basically locked up by the Willises, a pair of brothers who own a madhouse and who are apparently the only people consistently able and willing to actually deal with the king’s madnesses. However, when the king is in their custody, they control every aspect of his life and permit no visitors at all if they can help it.

Using magic, Strange manages to arrange a meeting with the king, who is certainly mad but also oddly lucid about certain things. It’s clear the king is unhappy as well, which Strange learns more by overhearing the king speaking to an invisible guest (whom the reader should recognize as the gentleman with the thistledown hair) than by conversing with the king himself. Indeed, the king seems to hardly see Jonathan Strange at all, and has frustratingly little to say to him throughout the visit.

The Song of Strange’s Life

Strange takes the king outside to walk through the garden, much against the desires of the Willises, and things just keep getting weirder. The king begins to wander off into a strange wood, and Strange feels himself being lured that direction as well, hearing strange music. The king tells him that “he” is playing for Strange, and Strange hears that the song does indeed describe his life, although he doesn’t know who “he” is. Realizing that something is amiss, Strange suddenly has the idea to use an ancient sort of spell to resist the fairy magic he’s found himself entranced by, and he manages to cancel the enchantment and save himself and the king.

When Strange returns to Norrell, he asks straightaway about fairies, and Norrell is unhelpful and rather evasive on the subject. Apparently, the affinity of fairies for the insane has been written about at length, and this is what initially guides Strange’s line of questioning. However, Norrell seems eager to put an end to the topic by suggesting that fairies no longer live in England at all anyway, and certainly he and Strange would never be so reckless as to summon one even if they did.

To Crush Their Spirits

Finally, Chapter 34 is a short one, in which the gentleman with the thistledown hair takes Stephen Black on a trip to Africa so they can discuss what to do about the two magicians. These sort of conversations with the gentleman are some of my favorite parts of this book just because he’s so irrational and unbalanced. Still, there is a method to his madness, and he still intends to make Stephen Black the King of England. First on the agenda, though, is to destroy or otherwise thwart the two magicians who seem so dedicated to impeding the gentleman’s plans. “We must make them wish they had never taken up the practice of magic!” he announces at the end of the chapter.