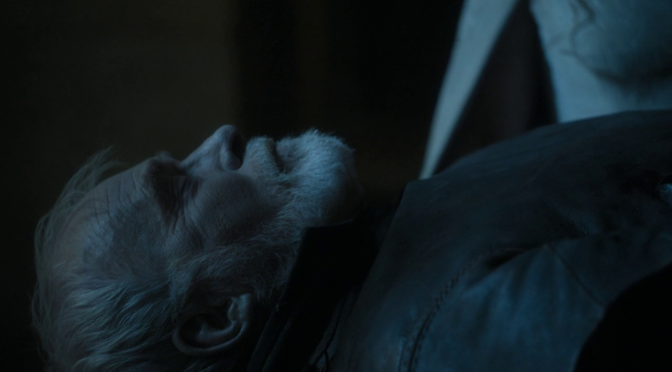 This is my favorite episode of this season so far, mostly because it managed to not include anything that enraged me. What it did include was a lot of stuff that I love about Game of Thrones. “Kill the Boy” had dragons and plenty of Stannis and probably the most amazing awkward family dinner scene the show has produced so far. If, like me, you think Lannister family dinners make for great television, you will adore family dinner with the Boltons.

As always, spoilers for this episode and some book stuff are under the cut.

I might just have missed it in last week’s opening credits, but I just noticed that Dorne shows up on the map now, although we don’t see Dorne in this episode.

“Kill the Boy” opens in Meereen, where Missandei is sitting by an unconscious Grey Worm. Elsewhere, Daenerys is grieving over Ser Barristan, who didn’t survive last week’s fight. As a huge Barristan the Bold fan, I’m pretty devastated that he’s dead at all, and I’m a little disappointed that his funeral isn’t a bigger deal. However, apparently Daenerys grieves by feeding people to her dragons, and she intends to start with the leaders of the Great Families of Meereen. My only quibble about this bit is that show!Hizdahr is a much simpler man than book!Hizdahr. I kind of miss suave, scheming Hizdahr, although I do like Joel Fry. The look on his face when he realizes Daenerys’s intentions is priceless.

Segue to Castle Black, where Sam Tarly is reading the latest news of Daenerys to Maester Aemon, who is likely her last remaining relative–and dying. Jon Snow pops in to ask for Maester Aemon’s advice, which is to just “do it,” whatever it is. Half the men of the Night’s Watch already hate Jon, so he certainly can’t make things much worse for himself. “Kill the boy, and let the man be born,” Aemon intones.

With the significant changes to Jon Snow’s story in the show, I feel like this line didn’t have quite the resonance on screen as it did in the book, but it was good.

Next, Jon goes to speak with Tormund, who is still being kept in chains at Castle Black. Jon wants Tormund to lead the Free Folk south, through the Wall, where they will be settled in the lands that belong to the Night’s Watch. The obvious problem with this is that the Night’s Watch has spent thousands of years fighting to keep the Wildlings out of the North. Tormund is convinced, but on the condition that Jon goes with him to Hardhome to retrieve the remaining people. The men of the Night’s Watch, though, are less happy about it, even when Jon points out that if they don’t rescue the Wildlings, they’ll just come back as snow zombies anyway.

Brienne and Podrick have stationed themselves in a small inn in sight of Winterfell. Podrick is optimistic that Sansa is safe from the Lannisters, but Brienne is certain that Sansa is still in danger, even if Sansa doesn’t realize it. Brienne sends a message to Sansa through some of the common people who are still Stark loyalists.

At Winterfell, the episode hits its one rather sour note as Ramsay and Myranda are having a lover’s quarrel, followed by the creepiest make up sex ever (although I must admit that it was the tiniest bit hot when Myranda bloodied Ramsay’s lip–just a tiny bit, though, before the scene veered back towards grossville). There’s basically nothing I like about this relationship at all, and I hate that the show even created this Myranda character as a female counterpart to Ramsay. I hate that Myranda’s primary motivation now seems to be sheer feminine jealousy and spite, and I’m honestly just weirded out by her creepy dead eyes at the end of this scene.

Elsewhere in the castle, Sansa receives what is presumably Brienne’s message: if she’s ever in trouble, she’s to light a candle in the highest window of the broken tower (the one that Bran fell from in the first episode). As Sansa revisits the tower, Myranda seeks her out with a surprise. The surprise, of course, is Theon! Who is living in the kennels with the dogs, covered in his own filth. “You shouldn’t be here,” Theon tells Sansa, and I can’t help thinking that truer words have seldom been spoken on this show. Later, Theon confesses to Ramsay that Sansa saw him. Rather than being angry, however, Ramsay magnanimously forgives his creature and then heads off to the show’s best family dinner scene to date.

Roose is polite, asking after Sansa’s comfort, and Ramsay is playing the part of dutiful son and solicitous suitor, toasting the upcoming marriage. Lady Walda tries to make small talk and immediately missteps, and we see quickly that though Sansa might be playing a role here, she’s also not here to play nicely.

And that’s when Ramsay brings out Theon to show him off, because nothing makes a family dinner more awkward than parading around the murderer of your new fiance’s little brothers. “Reek” is even going to give Sansa away at the wedding. I kind of love how, even though Sansa is a bit shocked by Ramsay’s behavior, she barely bats an eye through all of this. Bizarre and awkward as it all is, she soldiers on through.

I think the real star of this family dinner is Michael McElhatton’s face, though. His expressions as Roose Bolton are just incredible, and his face near the end of dinner, right before he and Walda announce their pregnancy made me straight up cackle in delight. The only thing better than Roose’s face is Sansa’s–I loved her little smirk as she observes Ramsay’s dismay at the news. I would like to see more of Walda, but maybe that will come later.

After dinner, Ramsay and Roose are having a talk. Ramsay is concerned about what the new baby will mean for his position as Roose’s heir. By way of reassurance, Roose tells Ramsay about Ramsay’s mother, a common girl who Roose raped after murdering her husband. Apparently Roose knew as soon as he saw him that Ramsay was his son, and he basically tells Ramsay that as long as he doesn’t fuck up in the upcoming conflict with Stannis, his position is secure. The music here is a little overdramatic, but it’s otherwise an okay scene.

Back at Castle Black, Gilly and Sam are hanging out in the Night’s Watch library. She wants to know about books, and Sam tells her about the Citadel in Oldtown where Maesters are trained. Sam’s comment that there’s “far more adventure up here anyway” seems to confirm that they won’t be going to Oldtown in the show, which is disappointing, and I honestly don’t know what else they might have for Sam and Gilly to do in the show, with Jon heading off to Hardhome and Stannis and company leaving for Winterfell.

Stannis pops in to see Sam before taking his leave of Castle Black, and we learn a bit about Sam’s father, Randyll Tarly. Stannis asks about the white walkers, and Sam tells him about the army of the dead. “Keep reading, Samwell Tarly,” Stannis advises before leaving. This season has seen some really excellent expository scenes, and this is another one. It’s nice to see the show moving away from setting all its exposition in brothels.

Davos is uncertain about leaving for Winterfell so soon, and he’s skeptical of Stannis’s intention to take Selyse and Shireen with them. Stannis is eager to be on their way, though, and the next scene finds them setting out. It’s an impressive shot as the column rides south from the Wall.

Back in Meereen, Missandei is present when Grey Worm finally wakes up three days after the fight in the alley. Grey Worm is very decidedly in a funk, but his brush with death gets him to finally admit his feelings to Missandei and they share a very sweet kiss.

Later, Daenerys is asking Missandei for advice on how to proceed now that Ser Barristan is dead, and Missandei basically advises Daenerys to do whatever she thinks is best. As sad as I am to see Ser Barristan gone, it does give us an opportunity to see Daenerys sink or swim on her own.

And so she’s off to her dark, but surprisingly un-dank dungeon to visit with Hizdahr, who really, really doesn’t want to be dragon food. To his surprise, Daenerys has come not to punish him but to tell him that she will agree to the reopening of the fighting pits, although only for free men–there will be no slaves in Meereen while she is alive. Also, by the way, she’s going to marry Hizdahr to prove her commitment to the Meereenese people. Joel Fry really is great in this episode, and I’m starting to think that the show’s underuse of him in the past was a criminal oversight. I also loved Emilia Clarke in this episode. I’ve always found her portrayal of Daenerys to be a bit stiff and often unpleasantly melodramatic, but I found myself really believing in her performance here. Yes, please, more like this.

The decision to have Daenerys change her mind like this about the fighting pits and to propose the marriage to Hizdahr herself is a pretty major departure from the books, where both of these were things she agreed to under heavy pressure from her very large court, and I’m not sure how I feel about it. In the books, Daenerys’s time in Meereen is spent wrangling many factions and trying to find a balance between her dream of a just city and the political realities of ruling an actual place. On the show, we’re not really seeing much of this. Most of her scenes, especially since the exile of Ser Jorah, have been with only two or three other characters, often in a nearly empty throne room, and I think that this greatly reduces the drama and nearly eliminates the intrigue that is present in the books. I’m not certain that I would agree that the show benefits from the simplifying of this situation, but I do like the idea of a Daenerys who is less harried by sycophantic courtiers and more in control of her own destiny.

Speaking of Ser Jorah, the episode wraps up with an update on his and Tyrion’s journey towards Meereen. To avoid pirates, Jorah has decided to travel through Valyria, which I was very excited to see on the show. There’s some nice exposition here (again, good job, show!) about the Doom, and the shots of the jungle and the city are truly spectacular. The show is really stepping up its scenery porn game this year, and I love it. My favorite shot of this episode, though, is Tyrion’s face when he sees Drogon for the first time. The dragons this season are gorgeous, and there’s not much more majestic than an enormous Drogon flapping by on his way to do dragon stuff.

Tyrion’s first sight of a dragon is somewhat ruined by being attacked by stone men–victims of a very advanced case of greyscale. Tyrion falls into the water during the attack, is pulled deeper by one of the stone men, and then the screen goes dark for a long moment. Rather than ending the episode on this cliffhanger, though, we get to see Tyrion wake up after being pulled out of the water by Jorah. Both men claim to have escaped untouched by the stone men, but before the credits role we see Jorah scratching at a small gray patch of flaky skin on his arm.